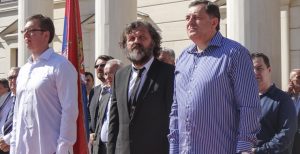 I am deeply concerned with your decision to host Mr. Emir Kusturica as a guest speaker for the October 31, 2017. Mr. Kusturica , a self-proclaimed Balkan Revisionist denies that genocide, systematic rape of women and girls and ethnic cleansing ever took place in Bosnia and Herzegovina {BiH}. Mr. Kusturica places the blame on Bosniaks for the Genocide in Srebrenica and other massacres that took place throughout the war of aggression on BiH.

I hope that you will agree that having Mr. Kusturica speak would be highly inappropriate and contrary to the mission of your organization which strives to promote peace and justice.

I urge you to stand up for justice and truth and reject all affiliation with Mr. Kusturica and his work.