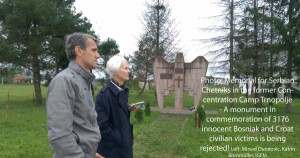 IGC – ACTION ALERT: Sign a petition for a monument in commemoration of the 3176 innocent civilian victims in genocide in Prijedor

Institute for Research of Genocide, Canada {IGC} invites all friends of truth and justice and all fighters for human rights and freedoms to sign a petition for a monument in commemoration of the 3176 innocent civilian victims. The petition is initiated by Mirveta Mrkalj-Durbe and Mirsad Duratović, members of the International Expert Team of IGC. The petition will send to Dr. Angela Merkel Chancellor of Germany and High Representative in Bosnia and Herzegovina Valentin Inzko.

IGC would like to remind the international community that the surviving victims and witnesses of the aggression and genocide in Prijedor are being humiliated and denigrated by having to beg for the right to publicly remember the their own suffering and to commemorate the deaths of their family members, friends, and fellow citizens. Any public commemorations of the anniversary of the onset of aggression and genocide in Prijedor are officially forbidden, and criminal charges have been filed against the organizers of peaceful events that were held to commemorate the genocide. This constitutes the continuation of genocide against Prijedor’s Bosniak and Croat communities by other means. Municipal authorities systematically terrorize Bosniak and Croat citizens of the municipality and treat them as second-class citizens. Municipal authorities also publicly humiliate organizations of survivors and witnesses of the genocide in Prijedor and are deliberately spreading fear among the families and friends of those murdered or missing in Prijedor. War criminals are allowed to walk freely in the municipality and are taking up positions of authority in the local government. Municipal authorities allow large public rallies of fascists groups that had been formed in the Second Word War and are known to have committed war crimes to take place. The Municipal authorities continue to ignore the international community’s demands that discrimination based on ethnic and religious grounds must be outlawed and prevented, that the truth about the genocide committed in Prijedor must be revealed, that war criminals must be brought to justice, and that the suffering of all victims must be marked equally regardless of their ethnicity. These and many other attacks by Municipal authorities on human rights and basic freedoms are undermining the reputation of Prijedor, Bosnia-Herzegovina, the European Union, and the entire international community. They also constitute grave breaches of the Universal Declaration of Human Rights.  No one has the right to prohibit survivors and witnesses of genocide from commemorating their suffering and from seeking justice. In the name of the survivors and witnesses of genocide, the IGC calls on the international community to undertake further efforts to improve the state of human rights for the citizens of Prijedor by applying more pressure on the Municipality’s authorities to finally respect international standards of human rights. We request that the international community and its leaders to challenge the ongoing violation of the human rights of survivors and witnesses of genocide in Prijedor and to ensure that their right of memory, truth, and justice is protected and upheld.