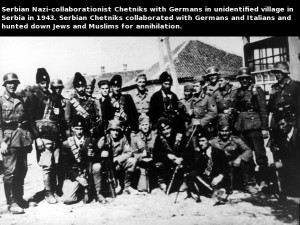 Prof. Dr. SMAIL ČEKIĆ
CHETNIC MOVEMENT OF DRAŽA MIHAILOVIĆ
The continuity of ideology, politics and, practice of the Serbian great-state project (“all Serbs in one state”) was restored again during the 90’s of the 20th century, and it escalated in aggressive wars and numerous crimes against humanity and international law, including genocide against Bosniacs (members of national, ethnic, and religious group as such) in the Republic of Bosnia and Herzegovina (in all occupied places and towns under siege, including in the territories of the UN safe areas – Srebrenica, Žepa, Goražde, Sarajevo, Bihać, and Tuzla).

Israeli Yad Vashem, The Holocaust Martyrs’ and Heroes’ Remembrance Authority,  has this to say about Serbian Chetniks:

“The Chetniks became collaborators and joined the forces fighting the partisans. After the occupation of Serbia by the partisans and the Red Army, the Chetniks were hunted down. Shortly after the end of the war, Mihajlovic and his men were captured and brought before a Yugoslav national tribunal. Most of them were hanged. At the initial stage, there were some Jews among the Chetniks, but when it turned out that the Chetniks were not fighting the invaders and their collaborators, and in fact were inclined to cooperate with them, the Jews switched to the ranks of the partisans. As the Chetniks increased their cooperation with the Germans, their attitude toward the Jews in the areas under their control deteriorated, and they identified the Jews with the hated Communists. There were many instances of Chetniks murdering Jews or handing them over to the Germans.”

To learn more about Serbian Chetniks — some of the worst mass murderers in World War II — read below:

The exhibit Genocide in Prijedor

Judicial bullying pays off in Karadzic