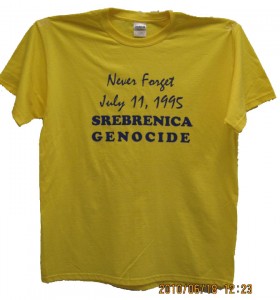 The Institute for Research of Genocide Canada is proud to  donate  to the Canadian Museum for Human Rights a Yellow T- shirt that was worn by the participants of the Silent  March on 11 July 2010 in support of the Congress of North America, Canadian Branch and the Institute for Research of Genocide Canada regarding the adoption of the Srebrenica genocide resolution in the Canadian parliament through the streets of Toronto. The yellow T-shirt will speak about the process of “breaking silence” surrounding Srebrenica, and the Parliament’s official recognition of Srebrenica Genocide in Canada, the biggest crime in Europe since the Second World War.

The Canadian Museum for Human Rights is Canada’s first federal museum devoted to the topic of human rights. Its mission is to enhance the public’s understanding of human rights, promote respect for others, and encourage reflection and dialogue on various human rights issues.

20 Years of Independence of B&H