Institute for Research of Genocide, Canada commemorates the Siege of Sarajevo 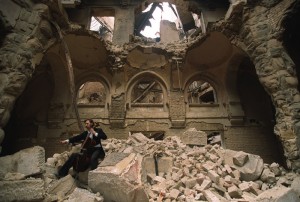 After Bosnia and Herzegovina had declared independence from Yugoslavia, the Serbs–whose strategic goal was to create a new Serbian State of Republika Srpska (RS) that would include part of the territory of Bosnia and Herzegovina, encircled Sarajevo with a siege force of 18,000 stationed in the surrounding hills. From there they assaulted the city with weapons that included artillery, mortars, tanks, anti-aircraft guns, heavy machine-guns, multiple rocket launchers, rocket-launched aircraft bombs and sniper rifles. From 2 May 1992, the Serbs blockaded the city. The Bosnian government defence forces inside the besieged city were poorly equipped and unable to break the siege.

It is estimated that nearly 10,000 people were killed or went missing in the city, including over 1,500 children. An additional 56,000 people were wounded, including nearly 15,000 children. The 1991 census indicates that before the siege the city and its surrounding areas had a population of 525,980. There are estimates that prior to the siege the population in the city proper was 435,000. The current estimates of the number of persons living in Sarajevo range between 300,000 and 380,000.

After the war, the International Criminal Tribunal for the former Yugoslavia (ICTY) convicted three Serb officials for numerous crimes against humanity for the siege. Stanislav Galić and Dragomir Milošević,  were sentenced to life imprisonment and to 29 years imprisonment, respectively, while Momčilo Perišić was sentenced to 27 years. One of the 11 indictments against former president of Republika Srpska Radovan Karadžić is for the siege. In the case against Stanislav Galić, the prosecution alleged in an opening statement that: The siege of Sarajevo, as it came to be popularly known, was an episode of such notoriety in the conflict in the former Yugoslavia that one must go back to World War II to find a parallel in European history. Not since then had a professional army conducted a campaign of unrelenting violence against the inhabitants of a European city so as to reduce them to a state of medieval deprivation in which they were in constant fear of death. In the period covered in this Indictment, there was nowhere safe for a Sarajevan, not at home, at school, in a hospital, from deliberate attack.

April 6, 2012, Institute for Research of Genocide, Canada  is marking the 20th anniversary of the start of the Siege of Sarajevo today by remembering the victims and urging governments of the world to take a stand against genocide.

“The residents of the capital city of Sarajevo have historically lived in tolerance and diversity; in a city where Christianity, Islam and Judaism flourished side by side for centuries. Unfortunately, Sarajevo was the object of aggressor’s siege whose goal was to destroy its multiethnic fabric and eliminate any semblance of religious and cultural cohabitation. Today, we remember the heroic perseverance that Sarajevo endured in its fight to maintain the spirit of peace and coexistance during the four years of its siege.

In order to prevent genocide in the future and in solidarity with the Genocide Prevention Month in April, Institute for Research of Genocide, Canada is remembering victims of Sarajevo and honoring the survivors. In paying tribute to this day, Institute for Research of Genocide, Canada pledges to advocate for justice, peace, and democracy because it believes that to rebuild the bonds of humanity, it is imperative that those responsible for genocide and ethnic cleansing be brought to justice. The struggle to seek justice for the victims of genocide must continue.

Institute for Research of Genocide, Canada strongly encourages Canada and the international community to recommit its efforts in the campaign against genocide.  It is essential that justice prevail, because only justice can help bring some closure to victims’ families and the survivors.

Study of the battle and siege of Sarajevo

The largest massacres committed against civilians of Sarajevo

The largest massacres committed against civilians of Sarajevo

ACTION ALERT – The power of truth and justice