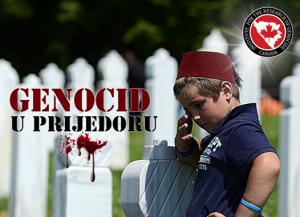 Alma Čizmić Clausen is secretary of the Institute for Research of Genocide, Canada

My name is Alma Čizmić Clausen, born in Prijedor 1973 year. My childhood passed happily with my family in the valleys of the town of Prijedor. As a girl of 18 years, where youth is still flared its splendor, the night of April 29, 1992 took the youth in the whirlwind of war. The children have overnight become adults, smiles on the faces of loved ones disappeared and heavy fog blanketed the city with sadness and pain.

We lived in the building next to the bus and main railway station, which was always the first target of the raid of the Serbian army. The building was searched every day from various Serbian armies, and we were taken out in front of the building to be harassed. When the town of Prijedor was taken by the Serbian government and when they started the ” cleaning” of the Bosnian people in nearby villages, my neighbor Mileva (Serb – God rest her soul), hid me at her house as her granddaughter (by name of Gordana), together with my little neighbor Vesna , nearly for two months. These two months, days were long and the nights were even longer. From the second floor at night I could see how my little town was burning, and in the morning from the ashes we thought it was snow, and I will ask myself how a man can become a monster overnight and start such a murder on innocent people, with monstrous aim to kill Bosnian people and to move them out of those areas of Bosnia and Herzegovina in order to achieve their dreams of becoming a large Serbian Krajina ( Veika Srpska Krajina).

For my 19 birthday, I was in the “Trnopolje Reception Centre” (the Trnopolje camp). I was there for two full months, September and October of 1992 year. For the days I spent in Trnopolje camp, I can only say one thing and that is: I would never wish anyone to go through and see what I went through and seen in that camp. The camp was disbanded at the beginning of November 1992 year, and we were able to get out of Prijedor in April, 1st 1993. We moved to Germany in summer of 1993 year. I started to write a book a long time ago back in Germany but was never finished, because whenever I get to the day when they told me that my family on the hill (Rizvanovici) has been killed I cannot continue writing, but one day maybe I will write a biography about the life before the war and during the war. In 1995 year we moved to USA where I now live and work. Also I finished school for Medical Administrator. I became Member of the Institute for Research of Genocide Canada (IGC) 2014 year. I am very glad that I have the honor to work with Professor Ramic and that through my life’s war experiences I have a chance to teach and help people around the world that something like this will never happen again.

“WAR IS NOT AN EXCUSE IN ORDER TO MAKE AN AGREEMENT BETWEEN TWO WORLDS, NICE HONEST WORDS AND PERSONNEL INTERACTION BETWEEN US IS STRONGER THAN COLD METAL, AND THE ONLY SOLUTION FOR BETTER FUTURE OF HUMANITY.”