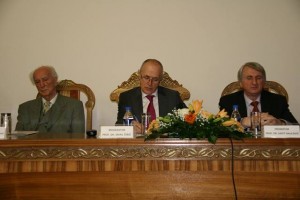 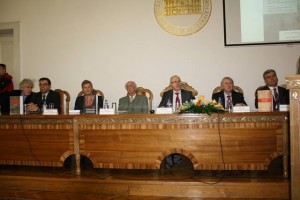 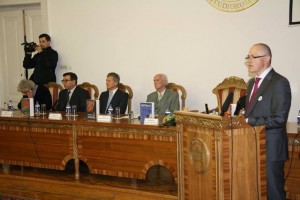 In the Grand Hall of the University of Sarajevo’s Rectorate, on Wednesday 19 February 2014, the promotion of publications by the UNSA Institute for Research of Crimes against Humanity and International Law was organized.

UNSA Vice-Rector, Prof. Dr. Faruk Mekic congratulated to the Institute for Research of Crimes against Humanity and International Law and the authors on behalf of the University of Sarajevo. Vice-Rector Mekic emphasized that these scientific publications represent a significant contribution to the updating and development of scientific knowledge about the crimes against humanity and international law, which is in the function of constituting, promoting and developing subjects and methods of the science about genocide and its specific scientific disciplines within the social sciences and humanities.

Dr. Mujo Begic , author of ” “The Crimes of Rebels in the Ljutocka Dolina” and “1201 Days under the Siege” stated that his motive for studying the events from 1941 in the Kulen Vakuf region concerning Bosniaks, as stated in the first book, was that the most of the victims were women and children. Dr. Begic also researched and wrote about the siege of the Bihac region, which was a safe haven zone . “That siege lasted for 1201 days and speaks about the crimes and the dimension of crimes that had been committed in that safe haven zone” said Dr. Begic and stressed that these books are trying to preserve the memory at certain events and send a clear message that no one goes through the ordeals that Bosniaks in Bihac and Kulen Vakuf region had gone through in two previous wars.

Thanks to the Canadian city of Hamilton