Banned the standard of Judge Meron 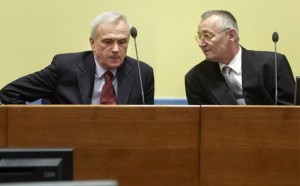 December 16, 2015.
Press release of the Institute for Research of Genocide, Canada

With the order for the retrial of Jovica Stanisic and Frenki Simatovic, Appeals Chamber of the ICTY has banned the application of the legal standard of Judge Theodor Meron, on the basis with which Momcilo Perisic was acquitted

The judgment of the Appeals Chamber ordered a new trial of Stanisic and Simatovic on points of law by the Trial Panel. The decision of the Appeals Chamber of the International Criminal Tribunal for the former Yugoslavia, {ICTY} to reopen the case again for the accused officials of the State Security of Serbia, Jovica Stanisic and Franko Simatovic, can be a step toward the truth about the aggression and genocide in Bosnia and Herzegovina and justice for the victims of these crimes. The indictment were Stanisic and Simatovic are charged with a joint criminal enterprise, which included the deportation and persecution, murder and other inhumane acts on the areas of the Republic of Croatian and Bosnia and Herzegovina, which would then be incorporated into a unified Serbian state. According to the indictment, at the head of this criminal enterprise was the former Serbian president Slobodan Milosevic.

We also believe that there is relevant evidence of the link Stanisic and Simatovic, for crimes not only in Samac and Doboj, but Eastern Slavonia, Zvornik, Bijeljina and Sanski Most, where the judges of the first proceedings rejected as unproven.

In particular, we believe in the truth and justice that the retrial could prove that Stanisic and Simatovic were the link between Milosevic and other participants in the joint criminal enterprise – Veljko Kadijevic, Blagoje Adzic, Ratko Mladic, Radmilo Bogdanovic, Milan Martic, Goran Hadzic, Radovan Karadzic Biljana Plavsic, Zeljko Raznatovic Arkan, Vojislav Seselj, with the aim of forcibly and permanently removing non-Serbs from the territory of Bosnia and Herzegovina and the Croatian, the Trial Chamber in the first trial rejected as unproven, although they had a direct and numerous contacts. The Appeals Chamber found that the Trial Chamber erred in law by not ruled or presented a reasoned opinion regarding the basic elements of joint criminal enterprise.
In this way again will be determined that the Heads of State Security of Serbia planned, organized with the intention of preparing units from 1991 to the end of 1995 to commit countless crimes in Bosnia and Herzegovina and Croatia.

We consider it useful for the truth and justice of the Appeals Chamber to order correctly applied the right of responsibility for aiding and abetting, which requires that the acts of the person who helps and supports, are specifically directed to assist the commission of the crime. This definition means that they must apply the standards that applied in the case of Theodor Meron Momcilo Perisic, who was acquitted in the appeal proceedings, having sentenced to 27 years. This is the third sentence of the ICTY, which reversed the standards by which Theodor Meron acquitted Perisic and so factually amnesty to all the world’s military leaders of any future liability. Demolition of standards in case Perisic and re-establishing responsibility in the crimes committed by Serbian authorities in Bosnia and Herzegovina as part of a joint criminal enterprise gives some new features that would intensify actions to find new evidence for a possible revision before the Tribunal of Justice.

Demolition of standards in case Perisic and re-establishing responsibility in the crimes committed by Serbian authorities in Bosnia and Herzegovina as part of a joint criminal enterprise gives some new features that would intensify actions to find new evidence for a possible revision before the Tribunal of Justice.

← “Sarajevo Under Siege”
A Declaration of 9. January →