Hamilton has paid tribute to the March 1. 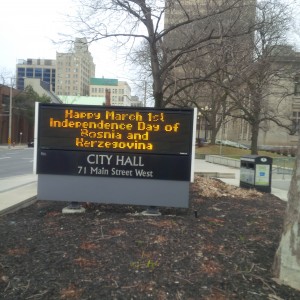 The Canadian city of Hamilton has paid tribute to the March 1.  Independence Day of B&H

On the occasion of the March 1. Independence Day of B&H, at the proposal of the Institute for Research of Genocide, Canada, the Congress of North American Bosnianks and the BIC Hamilton, with the Hamilton city mayor’s decision on a prominent electronic sign located outside of City Hall is posting brief message recognising the March 1. Independence Day of B&H
“Happy March 1. Independence Day of Bosnia and Herzegovina”
Those who respect the unique, sovereign, independent, and democratic Bosnia and Herzegovina, those who acknowledge the historical results of the referendum of 1992, those who acknowledge the scientifically verified fact that B & H was then recognized as an independent state, should feel honoured because of the historical fact that they belong to the generation of the founders of the independent state of Bosnia and Herzegovina. With regards to those who deny these facts: we will not plead with them, but rather send them the message that Independence Day will forever remain a symbol of the Bosnian state.
Institute for Research of Genocide Canada