B&H, Europe and the world are a necessary seal on truth and justice as a warning to future criminals 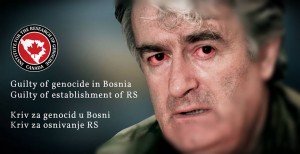 Bosnia and Herzegovina, Europe and the world are a necessary seal on truth and justice as a warning to future criminals.

The war crimes for which Radovan Karadzic is accused of go beyond the Fascist crimes from the Second World War. Therefore, these crimes represent a major test of the fundamental principles of truth, international justice and international law in general. Due to these principles this trial should fully overcome policy and political interests in order to not repeat the case of the trial before the International Court of Justice for aggression against Bosnia and Herzegovina and genocide. It is clear that the verdict made on the genocide in Bosnia and Herzegovina was a mistake made by the International Court of Justice.

We are not only judging Radovan Karadzic as one of the greatest war criminals in recent history but we are also judging the entity of the Republic of Serbia, a political territory which was a result from the genocide and national homogenization of Serbs. The judgment should be verified and shake the foundation of genocidal entities. With this judgment the country of Bosnia and Herzegovina can restore its national territory and their state power.

Through judgment we can get new evidence for Bosnia and Herzegovina to Audit a lawsuit against Serbia for genocide proving that the Serbian political establishment had an impact on Karadzic. The ICTY has the archives of Serbia’s National Security Council, which the International Court of Justice does not have. Simply the judgement should only include the basic elements of these archives. With that the Bosnian Herzegovinian people should force the political establishment of Bosnia and Herzegovina on the basis of the judgment to abolish the constitutional part of the Dayton Agreement and thus return to full sovereignty, territorial integrity, political personality of the state of Bosnia and Herzegovina.

In this manner, this judgment will be a satisfaction to the victims. Only in this way will the powerless and the victims get the power to persevere to victory of truth and justice. For mercy to the wicked is cruelty to the victim. Where justice ends, tyranny begins.
A Court that is not ready to punish a crime is an immoral, political court. Only truth and justice are the foundation of the future of a unified, sovereign, and democratic Bosnia and Herzegovina. And justice is, a criminal conviction for genocide outside the safe zone of Srebrenica in other state areas of Bosnia and Herzegovina, and a condemnation of the joint criminal enterprise as a special legal regime, doctrine, form of criminal liability for state territory of Bosnia and Herzegovina.