Genocide in the Prijedor camps 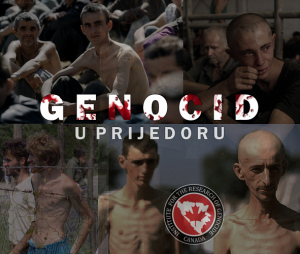 The Serbian aggressor in line with the Serbian political project “all Serbs in one state”, with its aggressive and genocidal character, in Prijedor systematically separated dozens, hundreds and thousands and hundreds of thousands of civilians and civilian population, as per plan, and in an organised manner, massively and deliberately, then arrested, captured, and incarcerated them in numerous concentration camps {most known Omarska, Keraterm, Trnopolje} and other places of incarceration, in which the captives were subjected to widespread physical and mental ill-treatment, inhumane conditions, everyday torture, starvation, beating up, harassment, massive and individual killing, injuring, raping, and sexual abuse, and other forms of crimes against humanity and international law.

Thousands, of civilians and civilian, including women and children, and the elderly, on the ground of their national, ethnic, and religious background (“because they are Bosniacs and Croats”, were incarcerated in the numerous concentration camps and other places of incarceration. Conditions in camps and other places of incarceration were difficult, inhumane, and cruel. Military and police personnel of the Serbian aggressor, responsible for management of these facilities, subjected the prisoners to cruel and inhumane treatment, severe beating up, terror, physical and mental ill-treatment, intimidation, and harassment. They, in the places of incarceration, with the intention to destroy Bosniacs and Croats, members of national, ethnic, and religious group as such, killed (massively and individually), severely injured many of them, and deliberately imposed conditions calculated to bring about their physical destruction. Prisoners were either victims or witnesses of inhumane treatment, including murders, rapes, sexual abuse, torture (even with teasers), beating up (with electric cables, sticks, rifle butts, iron bars, axes, batons, wooden sticks, baseball butts, metal fist “boxers”, chains, hands, boots, etc.), looting, humiliation, including other forms of physical and mental harassment, whereby the criminals were shouting, yelling, screaming at, and cursing Bosnia, and Bosniacs and Croats mothers. They forced prisoners to sing Serbian nationalistic songs and they “regularly insulted them on the ground of their national background”. Victims were severely injured, or they were subjected to mental harm, which among other things violated their “basic human dignity”. In numerous cases, the imprisoned women and girls were raped in camps, or they were taken out of the concentration camps and raped or sexually abused elsewhere. Bosniacs and Croats victims of the concentration camps and other places of incarceration, were selected based on their national, ethnic, and religious background. The only personal characteristic present in the decision to imprison men was the fact that they were not Serbs, that is just because they are Bosniacs and Croats. The only reason for all those forms of crimes against humanity and international law, committed against Bosniacs and Croats in the concentration camps and other places of incarceration was “that they were Bosniac and Croats by their ethnicity.

Available, valid, credible, and authentic sources of information, and undisputed pieces of evidence by the International Expert Team of the Institute for Research of Genocide Canada confirm that all forms of crimes against humanity and international law were committed deliberately against Bosniacs and Croats in the concentration camps and other places of incarceration in Prijedor. In this way, all the requirements relative to material element of genocide are fulfilled: all acts of genocide (actus reus), defined in Article II (a-e) of the Convention on prevention and punishment of crime of genocide. All the crimes were committed in the concentration camps with the intention to destroy Bosniacs and Croats, members of national, ethnic, and religious group as such, which verifies and confirms that this is the crime of genocide.

Emir Ramic
Chairman of the Institute for Research of Genocide, Canada