Under the UN flag was genocide in B&H 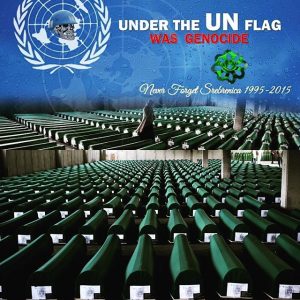 On the occasion of 24 October, The UN Day – Under the UN flag was genocide in B&H

On the UN Day Institute for Research of Genocide, Canada once again reminds the public worldwide that the UN betrayed Bosnia and Herzegovina. Although Bosnia and Herzegovina has been recognised by the UN and the international community as an independent and sovereign state in April 1992 and although Bosnian rebel Serbs and Bosnian rebel Croats had been overtly and covertly supported by the rump Serbia and Croatia respectively, the UN did not term Serbia or Croatia aggressors. The 2{4} of the UN Charter provides “All members shall refrain in their international relations from the breach of territorial integrity or political independence of any state or in any other manner inconsistent with purposes of the UN. Hence if any state uses violence against another state it automatically violates this basic prohibition and is liable to be termed as aggressor. It seems that the UN Security Council did not term Serbia and Croatia an aggressor as it would then have automatically led to the activation of Chapter VII of the UN Charter as in the case of Kuwait whence under Resolution 678 Iraq was branded an aggressor and a multilateral task force could be employed under the Chapter VII of the UN Charter.

United Nations, having supported the policy of rewarding aggression and punishment of genocide victims, did not protect the Republic of Bosnia and Herzegovina – its member, a sovereign and internationally recognized state, a victim of the armed aggression and a genocide victim. This is a matter of lack of political will in the Security Council, and inadequate and inconsistent structure of the apparatus and the UN organs. A significant number of those organs did not consider itself responsible for the enforcement of the UN Charter, or international law, or directives or the orders of the superiors. Genocide victims and international democratic public expected United Nations to act decisively and prevent the crime of genocide. And it is the fact that the United Nations deceived all that time the world public, and failed to take any step to protect civilians and civilian population and prevent the crime of genocide. United Nations did not protect the genocide victims, and they did not prevent the crime of genocide. United Nations facilitated the crime of genocide. They “strongly opposed to the use of air support against Serbs”. In simple words, United Nations did not act in line with their role. Fundamental UN document – Charter was not enforced, the UN apparatus was irrational, huge, and inert, deeply bureaucratized, and so inadequate in the post-block and post cold war era. At the time of planning, preparation, and execution of the aggression against the Republic of Bosnia and Herzegovina and the crime of genocide against Bosniacs, fundamental principles of international public law (prohibition and resistance to any aggression, prevention of crime of genocide, conviction of conquering territory of another state, guarantee of territorial and the integrity of a state, and other principles as expressed in UN Charter and Convention on prevention and punishment of crime of genocide) were completely suspended and ignored. An internationally recognized, independent, and sovereign state and UN member state was practically deprived of any right to defend its territorial integrity and safety of its citizens from the aggression and the crime of genocide, which is guaranteed in the UN Charter. Security Council, serving the interests of big powers, not only failed to defend Bosnia, but it also deprived Bosnia of its inherent right to defend itself from the aggression and crime of genocide. Victims of the aggression and the genocide were punished with the embargo on weapons and military equipment (25 September 1991), and thus they were deprived of the right to self-defense. Embargo, imposed on (SFR) Yugoslavia, not the Republic of Bosnia and Herzegovina, was illegal and without any legal effect, as it, supported strongly by Great Britain and other European countries, deprived a sovereign state and a member of the United Nations from its natural right to individual and collective self-defense, established in Article 51 of the United Nations Charter.

UN left the Republic of Bosnia and Herzegovina to the mercy of militarily more powerful aggressors, influenced the engagement of the international community by:
– Embargo on arms and military equipment;
– Delivery of humanitarian aid, which did not affect the dynamics and course of the aggression and crime of genocide, along with the cover-up and quiet monitoring of massive and systematic crimes against humanity and international law, and apparent lack of political will and disrespect for the fundamental universal human and moral values (of the Western forces) to prevent and stop the crime of genocide, which is the obligation of all signatories to the Convention on prevention and punishment of crime of genocide;
– Deployment of the Peace-keeping United Nations forces – UNPROFOR, which acted as “protectors of the Serbian aggressor” and provide criminals with a sort of legality and legitimacy;
– Establishment of No-fly zone in the airspace over the Republic of Bosnia and Herzegovina;
– Political peace talks, political and military pressures on victims of genocide, who verified the Serbian territorial capture and crime of genocide, by which the policy of territorial division of the Republic of Bosnia and Herzegovina was carried out in practice; – Maintaining negotiations with the aggressors and (war) criminals;
– Continuous concessions given to the aggressors;
– Supporting the aggressor state (Federal Republic of Yugoslavia – Serbia and Montenegro) and Slobodan Milošević personally;
– Supporting fascists, criminals, and murderers: collaborators and fifth column of the Federal Republic of Yugoslavia (Serbia and Montenegro) – pseudo state criminal creation Republika Srpska; – Ample ceasefire agreements; – Intolerable hypocrisy of the world diplomacy;
– Shameful policy of (im)moral and political equivalence of the aggressor and the genocide victims;
– Blaming aggressor’s victims and genocide victims that they kill (bombard) themselves;
– Erroneous qualification of the armed conflict and the nature of crimes, which contributed to the erroneous establishment of facts and judgment on the character of the armed conflict and the nature of crimes, along with the permanent advocating of the thesis on civil war and “ethnic cleansing”, while disregarding and avoiding objective and real state of facts: crime against peace – aggression (international armed conflict) and crime of genocide;
– Moral indifference and lack of consciousness, lies, hypocrisy and cynicism, lack of solidarity towards genocide victims;
– Relativization and denial of crime of genocide and permanent attempt to impose the guilt and responsibility on the genocide victim;
– “sanctions” against Federal Republic of Yugoslavia (Serbia and Montenegro), which were not enforced, by which the SC Resolutions were always violated;
– so-called United Nations Safe Areas, real true reservations and/or concentration camps, in which the civilians and civilian population, under the protection of Western states, were continuously subjected to the crime of genocide;
– setting up of the area of withdrawal of heavy artillery (of the Serbian aggressor) around Sarajevo to the distance of 20 km from the city center, etc., etc.