Canada’s response to the Bosnian independence

A referendum on the independence of the Republic of Bosnia and Herzegovina represents the fulfillment of centuries of political aspirations of the Bosnian being This act received its official international recognition on 6 April 1992, when Bosnia and Herzegovina was recognized by the European Community, the United States, Canada and other friendly countries and other political factors at the end of the 20thcentury. This is an old act dating back to the European banates and kingdoms, countries with historical and political legitimacy of medieval European history which is set in the community of modern nations. Although, the European community, the United Nations and the international community have accepted and internationality recognized the results of the referendum for a sovereign and independent Bosnia and Herzegovina unfortunately they have not protected the Republic of Bosnia and Herzegovina –who fell fell victim of armed aggression and genocide. Instead, the Security Council, unfortunately, serving the interests of the great powers, not only failed to protect the Republic of Bosnia and Herzegovina, but it also deprived their right to defend itself against aggression and genocide. The victims of the genocide are, unfortunately, because of their national, ethnic and religious affiliation, were deprived of their right to self-defense arms embargo (25 September 1991). The imposed (SFR) Yugoslavia, not the Republic of Bosnia and Herzegovina, embargo was unlawful and without legal force, as it deprived a sovereign country, a member of the UN, its natural right to self-defense. However, BiH has survived thanks to the courageous resistance of its anti-fascists defense lawyers and patriots conducted on the basis of the acquired sovereignty and independence in 1992.

Due to this reason, it is important for the citizens of BiH to experience Independence Day at full capacity and understand that BiH is an internationality recognized state which has its own independence day just as any other country in the world. To this day the state of Bosnia and Herzegovina faces important processes of Euro-Atlantic integration and the rise of the modern European world. It is, unfortunately, a political entity with a non-functional constitutional matrix and inappropriate structure of the political system’s asteroid belt, which is quite contrary to European criteria and political concepts.

Independence Day is a crucial historical moment of contemporary BiH as confirmed by the BiH state, legal, political and social duration and elevation.This is a historical fact that is scientifically and socially verified. The act of an independent BiH essentially forms an independent state with political establishment. The results of referendum confirm and reinforce the Bosnian statehood, independence and self-determination, as supported by majority of citizens. Twenty-five years after the recognition of the independence of Bosnia and Herzegovina there is still no government guarantee for their freedom. While the country is continually haunted for the search of truth and justice, in honor of all those who have recognized the importance of the independence and sovereignty of Bosnia and Herzegovina and cast their vote for independence and the future which we are obliged to mark the independence day. Canada but especially the city of Hamilton has done this for many years. Canada is one of the few countries in the world that recognized the importance of truth and justice for the future of BiH. 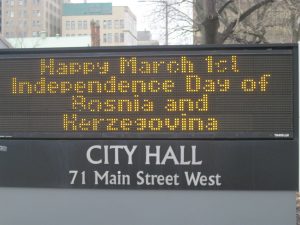 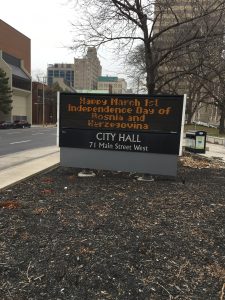