The Charter of Kulin is the best legally bh. state document 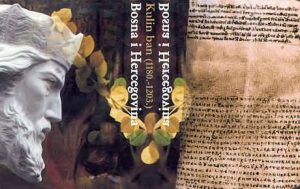 The Charter of Kulin is the best legally state document, which answers the continuous, malicious redrawing of the Bosnian history
The Charter of Kulin Ban was written on 29 August 1189. It represents the first preserved written document in the Bosnian language, which is a Bosnian ruler sent a letter written in Bosnian to the prince of another country. This confirms the stability of the centuries of the Bosnian state and the history of the Bosnian language. The Charter is of historical significance because it is written in Bosnian, the state is appointed by the name of Bosnia, and the people of the state of Bosnia called Bosnians. Kulin Ban was founded tolerant, the first and only official multireligious, multicultural and multinational state of the time on European soil. Kulin Ban indicate that Bosnia had a sovereign ruler, garnished state government, court, office and all the services that can ensure implementation of the provisions which Kulin Ban and Bosnian rulers guarantee each security and freedom are the movement and stay in Bosnia. Without evil thoughts and the consequences with full respect for the law which shows a high level of culture of human rights and freedoms that are able to feel all the foreigners during their stay and free movement in Bosnia. Kulin Ban at best legally documented manner, answer the continuous, malicious redrawing of history that Bosnia is part of the Greater Serbian or Greater Croatia creation. Therefore, anti-civilization, anti-historical, quasi-scientific redrawing historical facts led the recent aggression and genocide against the internationally recognized, sovereign, independent BiH state and its society with the aim of territorial division of the country and the destruction of the society in which hundreds of years existed idea of Bosnia and Bosnian the spirit of creating a Greater Serbia, Greater Croatia. It is therefore necessary to return the original document of the Charter, which is located in Russia, to Sarajevo and archived as the most important document of Bosnia and Herzegovina.