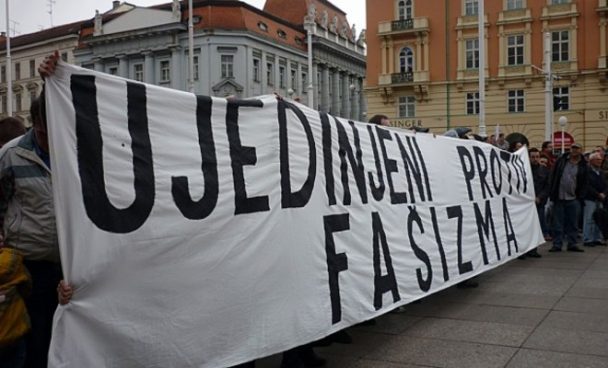 Statement of the Institute for Research of Genocide, Canada on the Anniversary of Kristallnacht

The Institute for Research of Genocide, Canada marks the anniversary of the tragedy of Kristallnacht – “the Night of Broken Glass.” Remembering the victims of the Holocaust, we remember victims of the aggression against the Republic of Bosnia and Herzegovina and genocide against Bosniaks.

On November 9 and 10, 1938, Nazi paramilitaries marched under the cover of darkness throughout the towns and villages of Germany and Austria smashing Jewish storefronts, arresting Jewish men en masse, ransacking Jewish homes, burning books and littering the streets with the parchment of sacred Judaic texts. Throughout the two-day wave of violence, hundreds of synagogues and thousands of businesses owned by Jews were destroyed or damaged. At least 91 Jews were killed, while another 30,000 were sent to concentration camps.

Kristallnacht foreshadowed the systematic slaughter of six million Jews and millions of other innocent victims. Seventy-five years later, Kristallnacht now signifies the tragic consequences of silence in the face of unmitigated hatred.

As we mark this anniversary, let us act in keeping with the lessons of that dark night by speaking out against intolerance, standing up to indifference, and re-committing ourselves to combatting prejudice and persecution wherever it exists. In so doing, we honor the memories of those killed and reaffirm that timeless call: “Never Again.”

The lesson that we have to keep is simple and clear, never Holocaust never Genocide. Unfortunately we have not yet learned the lesson of the Holocaust, because at the heart of Europe in the era of human rights and freedoms after swearing never again, the genocide against Bosniaks was carried. It was on Kristallnacht in 1993, the Old Bridge in Mostar was demolished. It is shameful that the International Criminal Tribunal for the former Yugoslavia, considered the Old Bridge, the historic work of world cultural heritage, a legitimate military target. Such decision of the Tribunal in The Hague does not support the learning lesson from Kristallnacht.