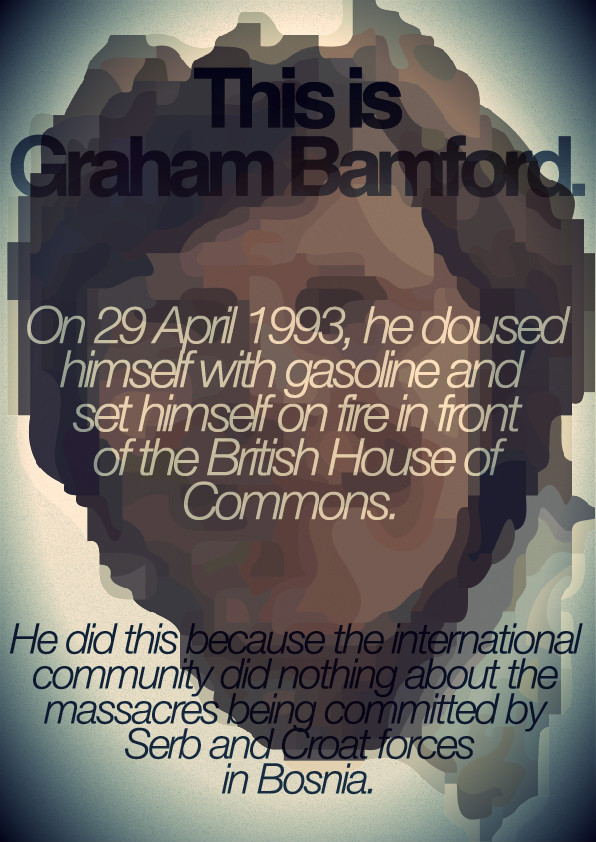 On 29 April 1993, Graham Bamford doused himself with gasoline and set himself on fire in front the British House of Commons in London. Bamford did it in the hope of drawing attention to the atrocities committed during the war in Bosnia and Herzegovina, particularly the Ahmici massacre.

Bamford wrote that ‘a photograph in the newspaper of a distressed little Balkan girl about the age of my own daughter galvanized me into action’. A few days later he wrote a final message: ‘The British army must not be a guard of honor at a mass funeral. Bosnian babies, children, and womenfolk are waiting for the politicians to do what they know they should – give them military protection.’

Graham Bamford, a citizen of Great Britain, had poured gasoline over himself and set himself on fire in the middle of the day on the 29th of April 1993 in front of the House of Commons in London. He died in a horrible agony.

That he did as a sign of his personal protest on behalf of the inability of Great Britain to do something to help the citizens of Bosnia and Herzegovina during the aggression. Great Britain was shocked, his death was quickly obliterated.

This act of self-sacrifice should be remembered and appreciated, because such events are rarely noted in history.

“Graham Bamford was deeply moved by the images which were coming from the warzone in Croatia, later from Bosnia and Herzegovina. According to the testimonials of his acquaintances and psychologist, he saw his own daughter in every victim from Bosnia and Herzegovina. His state was especially worsened when he saw images from central Bosnia, following the 16th of April 1993, when the British media reported of the terrible massacre done by an HVO unit on the civilians of the Ahmići village. One hundred and sixteen people were killed, among which also a three-month old baby and an old man aged 83. Only 13 days after that crime, Graham Bamford, described as a calm, family man, decided to take his own life as a sign of solidarity with the victims from Bosnia and Herzegovina, thereby hoping to alert the public, which was not reacting to these atrocities.”

Graham Bamford’s last words were: “The British must stop the war in Bosnia, even by force, if necessary. The British army does not (only) have to be a guardian of honor at mass funerals. Bosnian babies, children, and women are patiently waiting for the politicians to do what they know they need to do – acquire military protection. They should not stand aside and calmly observe”.