Law regarding the banning of denial of genocide: “KLUB 100-PLUS” submitted petition by Valentin Inzko with 8,372 signatures 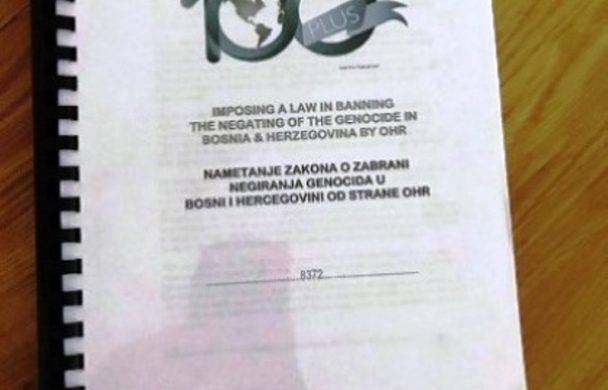 Law regarding the banning of denial of genocide: “KLUB 100-PLUS” submitted petition by Valentin Inzko with 8,372 signatures

On Friday 12/06/2020, member of “KLUB 100-PLUS”, Senada Softic-Telalovic, submitted a petition with 8,372 signatures at the OHR building in Sarajevo to Mrs Sandra Gluvacevic (executive assistant to HR OHR Vantin Inzko), asking for the representative of the international committee in Bosnia and Herzegovina Valenin Inzko to begin the process to impose a law, no later than 11th July 2020, in banning of denial of genocide in Bosnia and Herzegovina.

By starting this petition in banning of deniability of genocide, “KLUB 100-PLUS” wanted to give rise to the representative for Bosnia and Herzegovina, His Excellence Mr Valentin Inzko, his mentors and the international committee, to impose this highly important law.

Secondly, with the use of this petition, “KLUB 100-PLUS” wanted to give a voice to this Bosnian Muslims on whom the Serbian army carried constant genocides in Srebrenica at the “protected UN safe-zone” from 1992-1995, which ended in the execution of 8,372 Bosnian Muslims in July 1995. Of course, apart from their right to life being removed, their right to a voice was also removed, which has symbolically been returned with the use of this petition.

This is their voice and cry from the graves which say: “We are here dead, and yet we still have to suffer the injustice in this denial from the side of those that carried out the genocide upon us.”
This petition will be introduced to members of the diplomatic core in Bosnia and Herzegovina, the institutions of the UN and EU, as well as the number of Bosnian organisations. Added support will be sought from all of these parties.

Due to the Covid-19 pandemic and the current social distancing laws in place, the petition has been submitted online.

“KLUB 100-PLUS”, consisting of 131 Bosnian citizens living in 27 different countries, would like to take this opportunity to thank all of those that have in any small way helped, and continue to help, in the realizing of this petition.
“KLUB 100-PLUS” will keep the petition active and would like to invite all of those that would still like to support to do so using the following link: http://chng.it/PFHRM2s294