An open letter from the IGC to the mayor of Prijedor 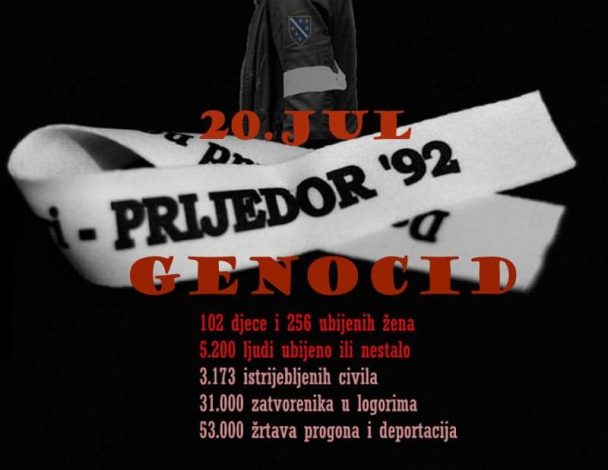 An open letter from the IGC to the mayor of Prijedor

We asking of you to finally show some humanity and morality and to declare July 20 a Day of Mourning in the area of Prijedor for the victims, for the murdered children, and for the murdered women. On this holy day, you have the opportunity to send a messages of peace, tolerance and reminder from Prijedor, a message on your behalf that will show respect towards the victims.
As you are very well aware the municipal authorities of the city of Prijedor never publicly acknowledged the actions of then authorities and gave repentance for the suffering that thousands of Bosniaks and Croats went through, and they never offered a hand of reconciliation and repentance. Denying such a crime requires an organized approach and support for the perpetrators.
However, we will not give up, we will not and can never forget genocide. If we give up on the common future of Prijedor on the basis of truth and justice, on the basis of confession and repentance for the crime, we will also give up on the common future of the state of Bosnia and Herzegovina, which we must not and will not allow.

We will continue the international campaign to provide the victims of the genocide in Prijedor with a dignified memory and commemoration, as well as the erection of an adequate memorial, as a reminder of the horrors of the genocide done upon them. We are still working to give the victims of the genocide in Prijedor the right to mark the infamous concentration camps as memorials of a horrible crime done upon the Bosniaks and Croats in Prijedor, and to make May 31 a permanent date mark of the Prijedor White Ribbon Day and to declare July 20th as a Day of Mourning in the city of Prijedor. Because the genocide in Prijedor is an extremely inhumane act, committed under the direction of a para-institutional, great nationalist regime with the intention of subjugating, dehumanizing and creating unbearable living conditions in order to carry out ethnic cleansing of the Bosniaks and Croats as quickly and cruelly as possible.

You need to finally enable the victims of genocide to exercise their rights, and the initial right for the victims is for wrongdoers to confess to the crime, repent and seek forgiveness. Therefore, we urge you to give your vote for the defense of the rights of the victims, because until the just struggle of the victims is respected, there is no happier common future for the city of Prijedor.

Victims must not be humiliated, and you have the power for make it right. You as a mayor have a chance to ensure a better common future for Prijedor. The first, small step for the better future is that you personally can make the proclamation that July 20th becomes the Day of Mourning in the city of Prijedor. This proclamation would, unlike your predecessors, show victims that you are in favor of a better united future in Prijedor.

The Institute for Research of Genocide Canada will continuously write open, public letters to the mayors of Prijedor until their conscience is awakened and thus declare July 20 a Day of Mourning. We will never tire of working to protect the basic human rights of victims of genocide.

The Institute for Research of Genocide Canada  {IGC}

← Canadian Jews and Muslims will gather to remember and honour the victims and survivors of the Srebrenica genocide.
Canadian parliament to discuss Resolution calling Prijedor massacre a genocide →