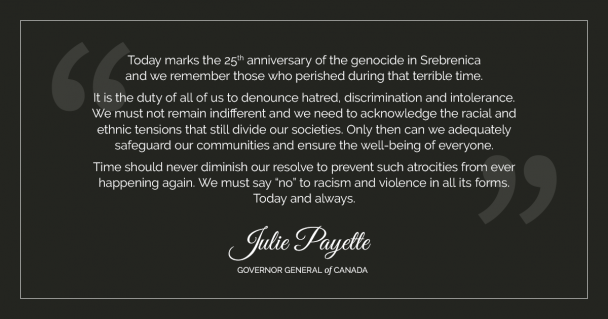 “Today Canada joins communities and countries around the world to pay tribute to the memory of the victims of the Srebrenica genocide. This is a dark period of history that we must never forget. And as we mark the 25th anniversary of this tragedy, we vow to remember and honour those who unjustly suffered and lost their lives. We mourn with the families, friends, and loved ones of the victims and pay tribute to the survivors who continue to live with these painful memories and who keep fighting for truth and justice. On reste un membre engagé du Conseil de mise en œuvre de la paix. Et on continue d’aider la Bosnie Herzegovine à instaurer une démocratie stable, multiethnique et viable sur le plan économique. On réaffirme aussi notre engagement à bâtir un monde où il n’y a plus de discrimination et personne n’est victime de persécution. Today and every day we must reflect and learn from these dark periods in human history and together we must all stand firm against hatred, intolerance and discrimination. Because by standing up for human rights around the world we will honour the victims and make sure atrocities like this never happen again. To Bosniaks in Canada and around the world: Canada stands with you and mourns with you today. Merci, thank you,” Trudeau said in his video message.

Statement by Minister of Foreign Affairs on Srebrenica Memorial Day

July 11, 2020 – Ottawa, Ontario – Global Affairs Canada. The Honourable François-Philippe Champagne, Minister of Foreign Affairs, today issued the following statement: “Today marks 25 years since the Srebrenica genocide in Bosnia and Herzegovina. “Canada honours the memory of the victims, including the more than 8,000 Bosnian Muslim men and boys who were killed, and we mourn alongside their families and loved ones. “We join our voices to those who continue to push for truth and justice ever since this painful and horrific episode. “As a member of the Peace Implementation Council, Canada remains committed to supporting Bosnia and Herzegovina on its path to reconciliation and supports its development as a stable, economically viable and multi-ethnic democracy. “Canada condemns all war crimes unequivocally. We must always remain vigilant against the perils of prejudice and intolerance.”
https://www.canada.ca/en/global-affairs/news/2020/07/statement-by-minister-of-foreign-affairs-on-srebrenica-memorial-day.html

Governor General of Canada Hon. Julie Payette in memory of the genocide in Srebrenica

Today marks the 25th anniversary of the genocide in Srebrenica and we remember those who perished during that terrible time. It is the duty for all of us to denounce hatred, discrimination and intolerance. We must not remain in different and we need to acknowledge the racial and ethnic tensions that still divide our societies. Only then can we adequately safeguard our communities and ensure the well-being of everyone. Time should never diminish our resolve to prevent such atrocities from ever happening again. We must say “no” to racism and violence inn all its forms. Today and always.