The legal nature of the war in B&H 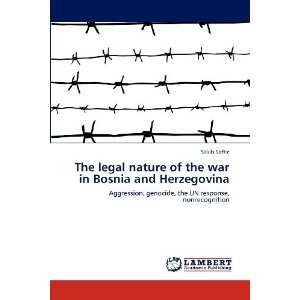 The legal nature of the war in Bosnia and Herzegovina: Aggression, genocide, the UN response, nonrecognition

This essay deals with the legal nature of the war in Bosnia and Herzegovina.The author first explains the basic meaning of the expressions “aggression” and “civil war,” the jurisdiction and procedures for authorizing the use of force under International Law, the legal consequences of the aggression in Bosnia and Herzegovina and the right of every state to defend its territorial integrity. This book answers some basic questions: the character of Bosnia and Herzegovina and its aggressors at the time that the conflict began and the UN response to the aggression. Those acts include those of: the Security Council, the Commission on Security and Cooperation in Europe, the European Community, the International Criminal Tribunal for the Former Yugoslavia, the UN General Assembly and the International Court of Justice. It also addresses obstruction of B-H’s right to self-defense, the nonrecognition doctrine, and and the legalization of the result of territorial conquest, genocide and ethnic cleansing. This book will be useful to all those who are interested in international law, the character of the war in B-H and the functioning of the UN system in response to cases of aggression.

← From Intellectuals to NATO
The Bosnian Muslims in II W.W. →