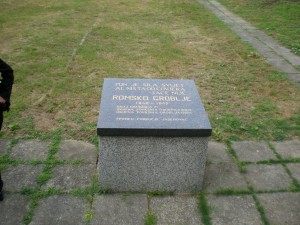 We must never forget the cruel genocide committed by the Nazis, which also caused the deaths of thousands of Roma and Sinti.

On 2 August 1944, more than 3,000 Roma and Sinti, mainly women and children have been gassed and gone through the fire in Auschwitz-Birkenau

We would like to express our deeply felt solidarity with the survivors and descendants of the victims of these horrible extermination campaigns. Victims of the Roma and Sinti holocaust are after the Jewish population, the second largest group of victims of the Nazi genocide during the Second World War in Europe. On today’s day of commemoration we should also like to seize the opportunity and warn against continued xenophobia, discrimination and intolerance which prepare the ground for exclusion and violence. This is a particular threat to ethnic groups in the World, such as the Sinti and Roma. The Roma and Sinti live on the margins of society, in most cases excluded from prosperity, and are increasingly becoming the victims of violent attacks. This alarming and unacceptable development must be put to a halt.

← ACTION ALERT:Respect for rigths of Bosniaks
The Letter to the Canadian government →