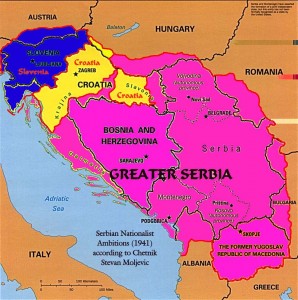 The Open Letter of IGC to the E Street Cinema in Washington, D.C. regards to the upcoming showing of “Ravna Gora”

As the voice of the victims and witnesses of aggression against the Republic of Bosnia and Herzegovina and genocide against its citizens, in the name of truth about the crimes against Bosnia and Herzegovina, and in the name of justice for the victims and witnesses of these crimes, Institute for Research of Genocide, Canada {IGC} is writing to you in regards to the upcoming showing of “Ravna Gora” at E Street Cinema on December 11, 2013.

More:The Open Letter to the E Street Cinema in Washington, D.C. regards to the upcoming showing of “Ravna Gora”

Dear friends of Bosnia and Herzegovina,
The Institute for Research of Genocide Canada has recently learned that the E Street Cinema in Washington, D.C. will be holding a screening of the series “Ravna Gora” on December 11, 2013 – a series that glorifies the Chetnik movement in the former Yugoslavia and deems to revise historical accounts of what happened. We have contacted the theater, however, the person in charge is Lauren Kleinman and you can e-mail her at laurenk@landmarktheaters.com and the number to reach her is 1-212-924-6701, ext. 232. Feel free to use what we wrote below when sending your e-mail and add/remove what you think is best. Please e-mail/voice your concerns.
Thank you!

The sample letters to send at laurenk@landmarktheaters.com
Dear Ms. Kleinman,
I am writing to you in regards to the upcoming showing of “Ravna Gora” at E Street Cinema on December 11, 2013. As a survivor of the recent Bosnian war, I am very alarmed that the respectable E Street Cinema will be showing this particular series because it deems to revise historical facts and is being used to glorify the Chetnik movement in the former Yugoslavia. The Chetniks – a Serb nationalist movement – infamous for using terror tactics against the non-Serb populations in Bosnia and Herzegovina and the Balkans was responsible for the ethnic cleansing of the non-Serb population and the ideology of creating a “Greater Serbia.” This same ideology was adopted by Slobodan Milosevic, a war criminal and the former President of Serbia. The Balkan region saw a revival of the Chetnik movement during the 1990’s Yugoslav wars where in Bosnia and Herzegovina in particular, hundreds of thousands of innocent civilians were killed, over 20,000 women and girls systematically raped and over 2 million innocent civilians displaced. Currently, the region is still grappling with widespread genocide denial and this screening is an insult to the hundreds of thousands of innocent victims that lost their lives at the hands of such extremists and an insult to the survivors that to this day have not received proper justice.
As a survivor of genocide that occurred in Bosnia and Herzegovina and a proud citizen of the United States of America, I ask you to please cancel the showing of the series “Ravna Gora” at the E Street Cinema – a series that promotes nationalism, deems to revise history and glorifies the terrorist Chetnik movement.
Thank you.
Sincerely,