The hope remains for the truth and justice 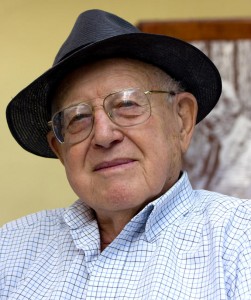 Institute for Research of Genocide, Canada has an exceptional honor and pleasure to inform the public that the world respected and recognized Croatian producer of Jewish origin, Branko Lustig, owner of the most prestigious film awards, two Oscars for the film “Schindler’s List” and “Gladiator”, an inmate during World war in the concentration camps of Auschwitz and Bergen Belsen, became a member of the International Expert Team of the Institute for research of Genocide, Canada.
“When I was last year in the capital city of Bosnia and Herzegovina, where I was awarded the Golden Heart of Sarajevo, with my wife Mirjana I went to Srebrenica. A few days earlier was the commemoration. Thousands of names carved in white marble in the Srebrenica Memorial Center reminded me of the day’s camp. Srebrenica can be considered a horror of what they were in Auschwitz, Bergen Belsen and other concentration camps during World War II. No penalty may not be enough to suffer the perpetrators of evil that are committed there”. Branko Lustig,

Branko Lustig, the double Oscar-winner and winner of acclaimed ‘Heart of Sarajevo. Academy Award-winning producer, Branko Lustig, has made over 100 motion pictures in a career that has spanned almost 50 years in the industry. His dedication and excellence in the world of filmmaking is worldrenowned and he is known in the cinematic community as an individual committed to making a difference. His impressive list of motion picture credits includes Schindler’s List, Gladiator, Hannibal, The Peacemaker, The Saint and Black Hawk Down.

Born in the small town of Osijek in Croatia, Lustig’s family dates back many generations in the region to the days when his great-grandfather was a rabbi in the Bosnian town of Bjelina. Lustig survived two years in Nazi concentration camps and when the war ended discovered most of his family had been murdered in the camps of Jasenovac and Auschwitz. His father was murdered by Hungarian fascists, leaving Branko, his mother, and two uncles as the only surviving family members.

Following the war, Lustig attended a local film academy and in 1955 began his career as an assistant director at Jadran Films, Croatia’s largest film and television studio. He subsequently worked as a production manager on such acclaimed European location productions as Fiddler On The Roof and Sophie’s Choice and served as assistant director on The Tin Drum. Lustig went to the United States in 1988 where he produced the mini-series Winds of War and its sequel, the Emmy-Award winning War and Remembrance. He also produced the Emmy Awardwinning television movie Drug Wars: The Camarena Story, the science-fiction thriller, Deadlock and the mini-series The Great Escape: The Final Chapter and The Intruders.

Lustig began his relationship with Steven Spielberg as a producer on Schindler’s List and has worked with Spielberg’s Amblin Films in the development of a number of other properties. He has also developed a long working relationship with Ridley Scott on Hannibal and the Academy Award-winning Gladiator and Black Hawk Down. He produced with Scott the 12th Century epic, The Kingdom of Heaven, starring Orlando Bloom and Liam Neeson.

Lustig is the winner of Academy Awards for Best Picture for Schindler’s List in 1993 and Gladiator in 2000. He is the winner of many other prestigious awards including BAFTA, DGA, Emmy and Golden Globe awards. Lustig has developed a special interest in projects that have dealt with the Holocaust and has strived to create films that educate the world as well as entertain.

← A declaration of Northamerican Bosniaks
Denying the Bosnian genocide is unforgivable →