Canadian response to Dodik’s denial of Bosnia and Herzegovina, Bosniaks and Bosnian language.

Institute for Research of Genocide, Canada received a reply to his letter of the Government of Canada about threats to human rights and freedoms in a smaller BiH entity

In response to the Government of Canada signed by the Canadian Foreign Minister John Baird, among other things says:

“Thank you for your correspondence concerning the decision on the registration of permanent residency that was adopted by Republika Srpska in Bosnia and Herzegovina. The Office of Prime Minister Stephen Harper has also forwarded to me a copy of your correspondence on the same matter. As you know, as a member of the Peace Implementation Council {PIC} Steering Board issued on May 22, 2014, Canada, along with other PIC members {except the Russian Federation}, has called upon the authorities in Bosnia and Herzegovina at all relevant levels to find a state-level solution to the issues of residency while respecting the freedom of movement and rights of returnees. Members of the PIC also underlined in the communiqué that “regulations at other levels of movement should be rescinded” and all parties should refrain from blocking state-level institutions, thus ending the unnecessary polarization of the matter of residency. Please be assured that it is the policy of the Government of Canada to work with the Government of Bosnia and Herzegovina and the international  community toward the full implementation of the Dayton Peace Agreement. Canada continues to be committed to the territorial integrity and sovereignty of Bosnia and Herzegovina. As outlined in my previous letters to you, Canada has a keen interest in seeing the development of Bosnia and Herzegovina into a stable, secure, multi-ethnic democracy, fully integrated into Euro-Atlantic structures. Canada encourages all citizens of Bosnia and Herzegovina to be fully engaged in the political process aimed at promoting peace, justice, democracy and the rule of law. Thank you for taking the time to write and share concern of the Institute for Research of Genocide, Canada”. 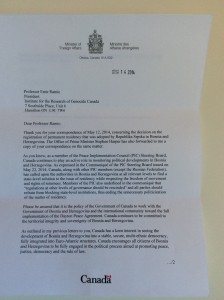 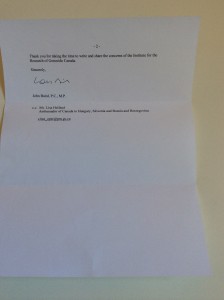 ← A shameful award
On Croatian TV about Dejan Jovic →