CNAB and IGC have sent a protest letter 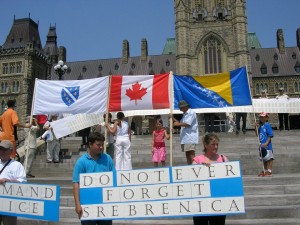 CNAB and IGC have sent a protest letter to the Minister of Defence of Canada
This is an insult to more than 30,000 members of the Canadian Bosniak community, most of who arrived in this country as victims of genocide, ethnic cleansing, and crimes against humanity during the war of aggression against Bosnia and Herzegovina in the 1990s. This year, we will commemorate twenty years since the Srebrenica Genocide, the single worst atrocity in Europe, since the Holocaust. It is therefore even more hurtful that the surviving victims of this genocide are subjected to the humiliation of their identity being used as a “target”.

More: A joint letter to the Minister of Defence of Canada

← ACTION: The action of Canadian Bosniaks
Burials for 520 →