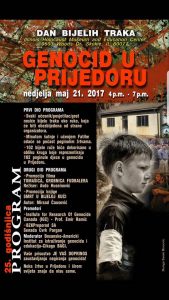 THE 25TH ANNIVERSARY OF THE GENOCIDE IN PRIJEDOR:
WORLDWIDE WHITE ARMBAND DAY

On May 31st, 1992, Bosnian Serb authorities in Prijedor issued a command via local radio ordering the non-Serb population to mark their houses with white flags or white sheets and to wear white tape around their sleeves when in public. This was the beginning of a campaign of mass executions, rape, internment in concentration camps and other crimes seeking to exterminate the Bosnian Muslim and Croat population of Prijedor.
This was the second time that members of an ethnic or religious group were physically marked for extermination – the first was by Nazi decree in 1939 when Polish Jews had to wear a white band with a blue Star of David on their sleeves.
In the end, 3172 people had been killed, with thousands more imprisoned, tortured, deported or raped, changing Prijedor forever.
To this day, the municipal authorities have yet to acknowledge the victims of genocide in Prijedor, refusing to publicly acknowledge the crimes committed despite numerous corroborations by international and local courts. Attempts to raise monuments in memory of the victims of Prijedor have been blocked, and access to crime scenes has been prevented, including by Acelor-Mittal, the company that owns the land where the notorious Omarska camp was located.
This solemn anniversary is being remembered to raise awareness and dignify the victims of genocide from Prijedor.
On this day, we speak out against those who would deny the crimes committed in Prijedor and support the spreading of the truth. On this day, we remember the people who suffered or lost their lives simply because of their race, ethnicity or political beliefs.

The Bosnian-Herzegovinian Community in Chicago, will observe this anniversary on:

FIRST PART OF THE PROGRAM:
• Each participant/visitor/guest will wear white armbands, which will be provided by the organizers.
• A minute of silence will be observed for the victims.
• 102 white roses will be decorated in the form of the circle, representing the children who died in the genocide in Prijedor.
SECOND PART OF THE PROGRAM:
• Promotion of “TOMAŠICA, TOMB OF FOOTBALL PLAYERS ‘
Director: Avdo Huseinovic
• Promotion of the book “Death in the White House”
Author: Mirsad Causevic
PROMOTERS:
• Insitute for Research of Genocide Canada (IGC) – Prof. Emir Ramic
• BCCPreporod NA – President Senada Cvrk Pargan
MODERATOR:
Ida Seferovic
• Bosnian American Institute for Genocide Research and Education-Chicago
BAGI.

Your presence is YOUR CONTRIBUTION to stopping genocide denial!
(The event will commemorate memory of the victims of genocide in Prijedor on 21 May 2017, and on May 31 with White Armband Day)
Let the victims in Prijedor and around the world know they are not alone.
Stop the denial of genocide and remember the victims!

Central Commemoration of the Genocide in Srebrenica, Canada

Continuing the fight for truth in B&H