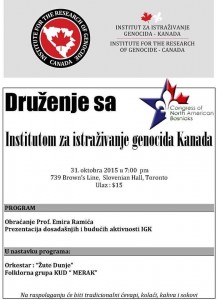 Evening with the Institute for Research of Genocide Canada

Institute for Research of Genocide Canada calls on all friends and supporters for the evening with the Institute for Research of Genocide Canada
October 31, 2015 at 7:00 pm
739 Brown’s Line, Slovenian Hall, Toronto
Admission: $ 15
PROGRAM
Speech by Prof. Emir Ramic
Presentation of past and future activities IGK
In the following program:
Orchestra: “Zute Dunje”
Folk group “Merak”
There will be traditional kebabs, pastries, coffee and juices.

As long as they deny the genocide we will beat them with the scientific and judicial truth. Without the knowledge of the past, we have no place in the future. Barbarians can kill people and destroy property, but cannot destroy the idea of Bosnia and Bosnian Spirit

Institute For Research of Genocide Canada (IGC) is a public scientific institution engaged in analysis of crimes against peace, crime of genocide, and other grave breaches of international law from the historical, legal, sociological, criminology, economic, demographic, psychological, political, cultural, medical, environmental, and other aspects of relevance for the complete research of crimes.

The main strategic tasks that have been realized:

The main strategic objectives to be realized in the future by IGC:

← ACTION: Sign a petition for Prijedor
Hon. Katrin Bornmüller in the Team of IGC →