Justice Delayed, Not Denied, in Bosnia 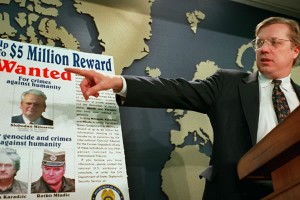 David Scheffer, Professor of Law at Northwestern University and former US Ambassador-at-Large for War Crimes Issues, is the author of All the Missing Souls: A Personal History of the War Crimes Tribunals.

Justice Delayed, Not Denied, in Bosnia

CHICAGO – On March 24, the International Criminal Tribunal for the former Yugoslavia (ICTY) sentenced Radovan Karadžić – the political leader of the Bosnian Serbs during the 1990s war in the Balkans – to 40 years in prison for genocide, crimes against humanity, and war crimes. It is a judgment that will profoundly influence international law, deter those who might otherwise commit atrocities, and open the possibility of political reconciliation in Bosnia. Lawless leaders, such as those in Syria, Sudan, South Sudan, Russia, and the Islamic State, have just been reminded of their vulnerability to international justice

And would-be war criminals are not the only ones who should think carefully about the verdict. Karadžić’s incendiary views – “Muslims cannot live with others,” he once said – still resonate in dark corners of a frightened Europe struggling to accommodate hundreds of thousands of Muslim refugees and in the nativist presidential campaigns of Donald Trump and Ted Cruz in the United States.

Making sense of a world of conflict and conflicting ideas.

Twenty years ago, in 1996, I was senior counsel to Madeleine Albright, then America’s ambassador to the United Nations. We pushed hard in the US National Security Council for Karadžić’s arrest; he had been indicted by the ICTY a year earlier, along with Bosnian Serb General Ratko Mladić, whose trial in The Hague is ongoing. For years, however, both men eluded capture, in part because many NATO and US officials were not yet prepared to accept the risks associated with apprehending them.

That timidity was a mistake. For years, it allowed Karadžić and Mladić to influence Bosnian politics and swagger in defiance of the rule of law. Their trials, following their arrests in Serbia less than a decade ago, have revealed evidence of acts of savagery not seen in Europe since World War II.

Karadžić’s crimes were a primary reason why then-President Bill Clinton created the post of US Ambassador-at-Large for War Crimes Issues, and why the Senate confirmed me to fill that post during Clinton’s second term. Karadžić had plunged his country into the depths of hell, and then, having been indicted for his crimes, was on the run.

The US needed a full-time envoy to help build and support the tribunals that would eventually bring him and other masterminds of atrocity to justice. And indeed, his conviction demonstrates once again the crucial role that the US has played in the pursuit of international justice, starting at Nuremberg and continuing to this day.

Bosnian Muslim victims have waited decades for an international court to rule that the ethnic cleansing they suffered – especially in 1992, the worst year of the conflict – was genocide. It is significant that the tribunal found Karadžić guilty of crimes against humanity during the war, for these types of crimes can be as monstrous as genocide. The tribunal also found that acts of genocide (killing Muslims and “causing serious bodily or mental harm”) were committed when Bosnian Serbs attacked seven predominantly Muslim municipalities in 1992.

Sarajevo, the capital, suffered three years of sniping, shelling, and starvation tactics that killed thousands of Bosnian Muslims. As the West dithered, Karadžić sustained the siege and sought the extermination of the city’s inhabitants. The tribunal convicted him of the “spread of terror,” a massive war crime, and of murdering civilians in Sarajevo, essentially labeling him a terrorist, not unlike those who are destroying the lives of Muslims, Yazidis, and Christians in Iraq and Syria today.

The judges ruled that there was not enough evidence of Karadžić’s intent to destroy all or part of the country’s Muslim people to convict him of genocide for his role in the Sarajevo siege. But they did convict him of genocide for the massacre of thousands of Muslim men and boys in Srebrenica in 1995. For the survivors of the Bosnian war, that verdict demonstrates that the culminating act of his criminal leadership was indeed genocidal.

Finally, the crude tactic Karadžić employed in May 1995 to seize UN peacekeepers as hostages in order to intimidate NATO earned him another guilty verdict for war crimes. That will be remembered as peacekeepers are called upon to manage conflict situations around the world.

The judgment could also have important implications for Bosnia’s political future. The Dayton Peace Accords, which ended the war in 1995, have yet to unite Bosnia’s ethnic groups, and the country has been sliding deeper into turmoil, and edging toward breakup. During my visits to Bosnia, the victims of Karadžić’s crimes have told me that they needed to see the truth revealed first before they could reconcile with their Serb neighbors.

Until now, the truth has been slow in coming. The current president of Republika Srpska, Milorad Dodik, uses genocide denial to sustain his power and stoke hate-filled separatism. But Karadžić’s conviction for genocide eviscerates his divisive propaganda. With this verdict, perhaps a rapprochement between Muslims and Serbs can finally begin.

The lesson that politicians in Europe, the US, and elsewhere should draw from the judgment is that they are playing with fire in seeking electoral advantage by attacking Muslims. As events in Bosnia in the 1990s and in Syria and Iraq today so tragically demonstrate, the flames they are fanning could easily become a conflagration.

Karadžić will appeal the judgment. But, finally, the survivors of his atrocities will be able to stop living in the past and begin looking toward the future.

← Verdict is a compromise
Letter regarding historically incorrect book →