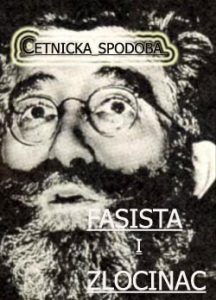 Ever since 90’s of the 20th century, numerous and versatile historic forgeries have been present, suggesting untruthful statements about important events surrounding the history of Bosnia and Herzegovina, without any corroboration in any documents or archives, aimed at constructing political truths valuable in current circumstances and the situations of our present moment. Unfortunately, we are facing the unimaginable abuse of science by scholars without any moral scruples and dignity, including pseudo scholars – researchers. This has particularly been characteristic for some Serb intellectuals and politicians, nationalistically orientated.

Ever since, mainly on political and ideological grounds, the thesis about the chetnic movement of Draža Mihailović has appeared as antifascist and “national-patriotic movement”. This thesis was embraced by political option that grew on the grounds of this movement, including the Serb scientific, professional and leading political elite and general public. Political options which grew on the grounds of this and other collaborationist movement try by all means to create a political environment that would facilitate unconditional acceptance of forgeries, particularly by younger generations as to who antifascists and who fascists were, who worked as the collaborationist of occupiers, who really fought the aggressors and their allies, and who took the side of Antifascist collation. Individual political options, feeling the betrayal (during the WWII) as a moral and political burden of its operation, justify it and try to reconcile the worrying parties, so as to alter the character of armed rebellion and armed resistance, rehabilitate war criminals in the court proceedings, and erase from the mind of people the betrayal of the state and nation.

It is a historic fact, based on voluminous documentation, that the chetnic movement of Draža Mihailović is a fascist movement of collaborationist, traitor, and criminal (genocidal) character. However, regardless of those documents and voluminous references, there are so many questions, which are intentionally avoided or simplistically explain, accompanied by unavoidable political qualifications, whereby they intentionally forge the historic facts. In line with such attempts, Serbia (in December 2004) in its legislation equaled the fascists and antifascists – partisans and chetnics, leading to repeated deception of national and international public, including a new betrayal of its nations, which are the principal positions of the chetnic movement of Draža Mihailović.

Numerous political options base their positions on challenging and denying National liberation war 1941-1945 and the post-war development of Socialist Federative Republic of Yugoslavia. To that end, certain political parties and some other political options, trying to defend their ideologies and political life and their activities, direct their operation towards the revalorization of collaboration, of both individuals and movements, in which the chetnic movement of Draža Mihailović has a special place. The overall activities were directed to qualify this movement as antifascist and denial of its cooperation with aggressors and collaboration forces in the territory of Yugoslavia.

So many papers about the chetnic movement of Draža Mihailović were published (more than one thousand bibliographic units). There were numerous studies, particularly by Prof. Dr. Miodrag Zečević, which served as a basis for this paper.

History as a science is familiar with the program and objectives of the chetnic movement of Draža Mihailović. Principal political objectives of the chetnic movement were formulated in several programmatic documents. Starting point in them as the historic idea of a “Great and homogenous Serbia”, “which includes the entire ethnic territory populated by Serbs” (“to border de facto the Serbian states and make only Serbian population live there”).

Starting from the positions that “Great Serbia” needs to “include the entire ethnic territory populated by Serbs”, including access to sea “for all Serb areas, which are close to the sea”, and that all Serbs should live in one ethnic state, free of other nations, it is obvious that it is a fascist movement of genocidal character. Integral part of that project is also a strategy of destruction of Muslims and “everything that is not Serbian”.

In the primary liberation war fought in Yugoslavia, 1941-1945, there were two worrying sides: from one side, those were the forces that fought the aggressors to liberate Yugoslavia, that is, the National liberation movement, under the leadership of Josip Broz Tito, while on the other there were all the aggressors in Yugoslavia and their collaborationists, including the chetnic movement of Draža Mihailović.

Contrary to the false presentation of the chetnic movement among the allies and its alleged great contribution to the politics of allies, the real situation in Yugoslavia was completely opposite. Units under the command of Draža Mihailović, along with the aggressor and quisling units, in cooperation or alone, pursued persistent fight against the units of National liberation army of Yugoslavia.

The English and American military representatives were in the headquarters of Draža Mihailović. Mihailović could not survive so long without political, moral and material support of the West. This assistance made it possible for him to conceal his cooperation with aggressors in the eyes of public. Mihailović particularly benefited from the arrival of American officers to his headquarters in 1944, following the departure of the English officers, at the time when the cooperation of his detachments and their collaborationist was so transparent and obvious (American officers remained in his headquarters until January 1945).

Chetnics of Draža Mihailović, following his orders and instructions, throughout the war and aggression, perpetrated numerous crimes against all the nations in all the areas of Yugoslavia, including genocide against Bosniacs.

Chetnics of Draža Mihailović, even in the territory of Serbia (collaborationist and quisling Serbia, was in the Second World War the first judenfrei state – the first country in Europe “cleansed” of Jews), in addition to Bosnia and Herzegovina, Montenegro, and Croatia, executed (killed and slaughtered) numerous Serbian civilians and civilian population, partisans (members of National liberation movement) and their followers, including captured partisans and severely injured persons, plundered many villages, physically ill-treated thousands of people, while raping so many girls and women belonging to partisan families.

Chetnics, among other things, killed an English major Terence Atherton and his radio‑telegraph operator Patrick O’Donovan, including one English sergeant, and slaughtered two American aviators of the French descent.

Chetnics of Draža Mihailović, during the Second World War (1941-1945), in line with the Serb ideology, politics and practice of the fascist and genocidal character, perpetrated genocide against Bosniacs, including other forms of crimes against humanity and international law. In achieving the genocidal project relative to extermination of Muslims, the worst crimes of genocide against Bosniac population (killing, slaughtering and injuring dozens of thousand of civilians and civilian population, regardless of gender and age; massive expelling; raping of women, girls, and young girls; forcible conversion to Eastern Orthodox Christianity, and destruction of homes and places of worship), were committed by chetnics in Eastern Bosnia, Eastern Herzegovina, and West Sandjak, that is, the border areas towards Serbia and Montenegro, and (to a certain extent) in other parts of Bosnia and Herzegovina, particularly Bosnian krajina, which is described in various relevant documents of different provenience.

The continuity of ideology, politics and, practice of the Serbian great-state project (“all Serbs in one state”) was restored again during the 90’s of the 20th century, and it escalated in aggressive wars and numerous crimes against humanity and international law, including genocide against Bosniacs (members of national, ethnic, and religious group as such) in the Republic of Bosnia and Herzegovina (in all occupied places and towns under siege, including in the territories of the UN safe areas – Srebrenica, Žepa, Goražde, Sarajevo, Bihać, and Tuzla).

International Expert Team of the Institute for Research of Genocide Canada