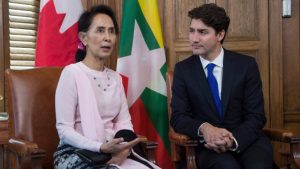 On behalf over 130 prominent world intellectuals – researchers of the crime of genocide and leaders for the protection of human rights and freedoms – members of the International Expert Team of the Institute for Research of Genocide Canada, I ask the Canadian government: to revoke the honorary Canadian citizenship given to Daw Aung San Suu Kyi, State Counsellor of Myanmar, and to unequivocally condemn the atrocities committed by Myanmar’s military and state-supported nationalist groups who have committed genocide against that nation’s Rohingya Muslim minority, and work with other international partners to bring the perpetrators of these crimes to justice.

Genocide is now being committed against the Rohingya Muslim minority by the Myanmar government. The Rohingya – numbering around one million – are a long-persecuted minority in Myanmar. The Rohingya who have sought safety in Bangladesh in recent weeks are telling eyewitness stories of ethnic cleansing and mass shootings of civilians by the Myanmar military. Human Rights Watch has analyzed satellite images that indicate Rohingya villages in northern Myanmar are being systematically burnt down. Some Rohingya are so desperate that they are fleeing Myanmar by boat, with many dying at sea. Bangladesh, which has seen 146,000 Rohingya seek protection on its territory in the past two weeks, is accusing Myanmar of planting landmines on its border, most likely to ensure they never return. A 2015 report by the International State Crime Initiative at the University of London, titled “Countdown to Annihilation: Genocide in Myanmar,” concluded that “The Rohingya face the final stages of genocide. Decades of persecution have taken on a new and intensified form since mass killings in 2012. The marked escalation in state-sponsored stigmatisation, discrimination, violence and segregation, and the systematic weakening of the community, make precarious the very existence of the Rohingya.”

In recent years all of this has been happening under the defacto leadership of Nobel Peace Prize laureate Aung San Suu Kyi who has refused to condemn the atrocities committed by the military and citizens of her nation over the past several years despite appeals to do so by the Dalai Lama, the Pope, and more recently by fellow Nobel laureates.

Whereas Aung San Suu Kyi’s inaction contradicts the basic Canadian values and principles of democracy, freedom, human rights and the rule of law – the principles on which Canadian citizen granted
to Aung San Suu Kyi, on behalf over 130 prominent world intellectuals – researchers of the crime of genocide and leaders for the protection of human rights and freedoms – members of the International Expert Team of the Institute for Research of Genocide Canada, but also on behalf of more than 30,000 Canadian Bosniaks, survivors of aggression and genocide in Bosnia and Herzegovina, I ask you to do everything in your power to revoke the honorary Canadian citizenship given to Aung San Suu Kyi.
Sincerely,

Dr. Emir Ramic
Chairman of the Institute for Research of Genocide

Institute For Research of Genocide Canada (IGC) is a public scientific institution engaged in analysis of crimes against peace, crime of genocide, and other grave breaches of international law.