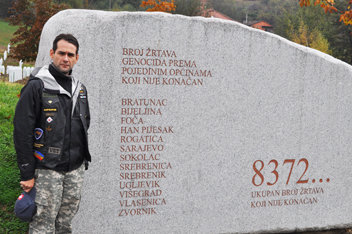 Public statement of Carlos Robert Steiner, a former Canadian army veteran and current member of the International Team of the Institute for Research of Genocide Canada

As a respected member of the International Expert Team for the Institute for Research of Genocide Canada, I invite all Bosnians around the world to unite in the struggle and call for the truth about the 1992-1995 war in the internationally recognized sovereign state of Bosnia and Herzegovina and the genocide of Bosnians. A true call for justice to the perpetrators and victims of these crimes.

I am a veteran of the Canadian Forces, army infantry, having served as part of UNPROFOR in 1993 stationed in positions in and around Srebrenica. I witnessed the crime of aggression and discrimination against Bosnia and Herzegovina, genocide and crimes against Bosniaks.

I have undertaken a legal battle for the truth about these crimes. I have filed formal complaints of discrimination, negligence and breach of privacy against the Canadian government, on my behalf and for the people of Bosnia Herzegovina. I am also pursing my efforts with the High Commission for Human Rights in Geneva, Switzerland, my other nation of citizenship.

Several of us from UNPROFOR, IFOR SFOR and KFOR intend to return to Bosnia Herzegovina in summer 2013, with the intention of marching for Srebrenica on July 11th. We are an international coalition of veterans who want to help and be heard.

Dear Bosnians around the world, with your single action we can to reach our common goal, the truth about the atrocities in Bosnia and Herzegovina and justice, peace and well-being for the victims of these crimes.