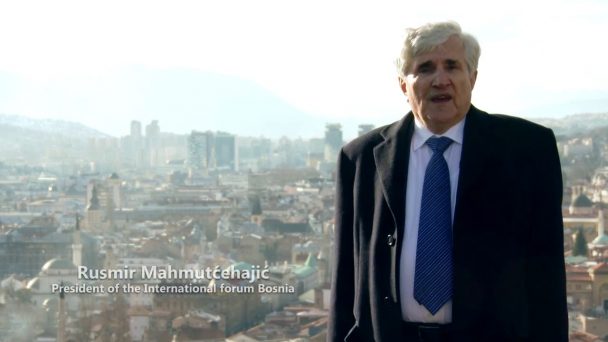 We have asked the most prominent experts in the field of international law, members of the International Expert Team of the Institute for Research of Genocide Canada to comment on an ongoing debate in Canada. The genocide that occurred in Srebrenica is in fact not freedom of speech and should be legally banned in Canada. The next comment is by Academic Rusmir Mahmutćehajić, author, former statesman from B&H, President of International Forum Bosnia

I am writing to express my support for the petition currently before the Canadian federal parliament to make denial of the genocide at Srebrenica illegal. I shall try to do so as succinctly as possible and, as you have requested, with reference to its impact on free speech.
Denial of the Srebrenica genocide is a major problem for several reasons.

Firstly, it is immoral in itself. This is not, however, sufficient reason for it to be illegal.

Secondly, it causes emotional hurt to the survivors and relatives of those killed in the genocide and is intended to do so. Generally speaking, the justifications for denial also involve arguments or untrue statements that amount to slander or libel of the victims, the survivors, and their ethnic fellows, in so far as they knowingly and maliciously misrepresent what happened (in terms of scale, scope, events and causes) and so attempt to place the responsibility for causing the train of events on the victims themselves or their ethnic fellows. Even when not explicitly made, such arguments are implied or logically entailed by the explicit statements made. They form part of a universe of discourse and more-or-less the only reason for denying the genocide in the first place.

The argument may, of course, be made that there is no need to make Srebrenica genocide denial illegal in this case, as those so inclined can prosecute under the existing libel and hate speech laws, including those that specifically make the denial of genocide (without specification) a form of hate speech if intended to cause harm.

This leads us to our third point. Unfortunately, genocide is the hardest of all crimes to prove and to make stick, especially insofar as it involves implication of a government apparatus and command structure. A verdict of genocide only really counts if passed by an International Criminal Tribunal or the International Court of Justice in the Hague. The burden of proof is extremely, even unrealistically high. Even when a verdict has been passed down, it has few consequences other than recognition of the nature of the crime in question. If that too is optional, then what does a verdict of genocide mean? It simply becomes a contested symbol that serves to ensure the continued division of the societies in question. Moreover, it loses all efficacy as a deterrent. Why should the threat of a genocide prosecution or conviction deter, when it is clear it can no longer be made to stick, in fact when it is clear such a verdict can itself become a contested symbol in the continuation of genocide after the fact through public discourse based upon hate speech aimed at reinforcing social polarisation?

As suggested above, the second and third points go together. In the case of Srebrenica, the crime of genocide has been proven. The Canadian parliament has voted a national day of commemoration for the genocide at Srebrenica. What is the point of having done so, if each individual case of Srebrenica genocide denial must be litigated afresh, at considerable expense and with insecure results? Recent examples related to Holocaust denial make clear the dilemma involved. By forcing a legal process on the merits in every case, one is playing directly into the hands of the deniers. They are not good faith questioners of the historical record and the evidence for it. They do not believe in their denial. They believe the genocide was justified and that it is precisely by denying it they can express their commitment to the goals for which it was carried out in the first place, the longer-term project of which it was a part. Their intention is therefore to instrumentalise their denial in an ongoing process of social polarisation and conflict. The very process of forcing debate and, if possible, a trial serves their goal. It gives them legitimacy, publicity, and victim status, and allows them to indulge in extended slander of their target community. Recognising a crime of Srebrenica genocide denial would, in a simple and effective way, prevent them from exploiting and instrumentalising hate speech by pretending it is free speech, without chilling their right to actual free speech. Let them admit the internationally recognised nature of the crimes at Srebrenica and then argue that they were justified, if they care to, in ways that are demonstrably not hate speech or intended to cause harm. After all, the nature of the crimes at Srebrenica has been established by an international tribunal and confirmed by the Canadian Federal Parliament. What legitimate reason can there be for denying it?
Our fourth point follows from this, namely that Srebrenica genocide denial is a deliberate political act, with clear and intended results. It is not merely a bad-faith denial of what happened at Srebrenica, but an inversion intended to blame the victims and their ethnic group for what happened, reinforcing divisions, promoting social fission, and entrenching the position of the perpetrators within their own communities, who are thereby recruited as accomplices after the fact. While a very few individuals with command responsibility have been convicted of genocide and a barely larger number found guilty of war crimes and crimes against humanity, the vast majority of those involved in either the culminating genocide at Srebrenica or the mass of war crimes and crimes against humanity that led up to it have faced no legal or social consequences. They have continued to live as respected and active members of their communities, who are aware of their actions. Moreover, even those accused of genocide, like Radovan Karadžić and Ratko Mladić, have been sheltered and celebrated by those communities for decades, which fought their extradition for trial tooth and nail. Those tried and convicted of the most severe war crimes, like Biljana Plavšić, Momčilo Krajšnik, and Vojislav Šešelj, have, on release, been received as heroes and lionised by the political and cultural elites of the Republika Srpska and Serbia. They have consistently used coded language to “deny” the genocidal nature of the crimes, while at the same time justifying and claiming credit for them and inciting their followers to defend their legacy, even to the point of committing new crimes. Their statements are not good-faith expressions of opinion, however misguided, but conscious interventions in political and public life with malicious intent to harm. And they succeed in their intention, with terrible and long-lasting consequences. Not least amongst these consequences is that they make a mockery of the court that tried them and found them guilty. There is a concerted campaign, that goes back to the establishment of the court, to undermine its authority and to render it not merely toothless, but contemptible. They and their fellow-travellers are in the most literal sense in contempt of court and lead others into the same position.

As the above argument makes clear, the denial of a genocide is an integral part of the genocidal process itself. This has been true of the Srebrenica genocide from the beginning. It continues to be the case today. The genocide in Srebrenica was a major factor in ensuring the Dayton peace agreement. That peace was not based on the clear victory of any one side, however. It was a compromise. Moreover, it could not include recognition of the genocide at Srebrenica as genocide for the simple reason that the international courts had not yet ruled on the matter. The compromise at Dayton meant that the area where genocide was committed remained under the control of successor structures to those that committed the genocide. It does so to this day. Consequently, the complicit political elites in the Republika Srpska and their sponsors in Serbia continue to deny recognition of the rulings of the international courts and so of the scope, scale and genocidal nature of what happened at Srebrenica. Not merely do they deny the genocide in Srebrenica, they justify the actions taken against the Bosnian Muslims of Srebrenica by the armed forces of the Republika Srpska and their paramilitary helpers from Serbia on grounds of self-defence. This inverted narrative, whereby the victims of genocide are characterised as themselves genocidal criminals, is dominant in the media of the Republika Srpska and Serbia, in their public and political discourse, and even in their schools. This combination of denial and inversion of the truth has the effect those who promote it desire, namely continued polarisation of the populations of the region on the basis of contested symbolic representations of the past and responsibility for it. This is the mechanism that converts a crime against the people who were killed at Srebrenica more than twenty years ago into an ongoing crime. Denial is not just a refusal to recognise a terrible act. It is an instrumentalization of that act to ensure its continued efficacy and to foster the conditions under which either side may find itself carrying out renewed acts of inter-communal violence that rise to the level of genocide. Individual acts of Srebrenica genocide denial cannot be isolated from the divisive and genocidal political project of which they are a part. It is for the above reasons that I support making the denial of the Srebrenica genocide illegal in and of itself. Markers must be put down against the constant and deliberate muddying of the waters, the intentional presentation of false information, and the strategic deployment of hate speech under the cover of free speech. The dignity of genocide verdicts must be maintained, their truth defended, particularly given the extremely high bar for the issuing of such a verdict in the first place. Those who wish to contest them should be forced to find respectful ways to do so. People have a right to their opinions and to express them, so long as they are not wilfully harmful of others and contemptuous of truths established in court. No one has a right to continue the project of physical genocide by symbolic means in the hope of securing its goals and, in the worst cases, of actually reviving it.