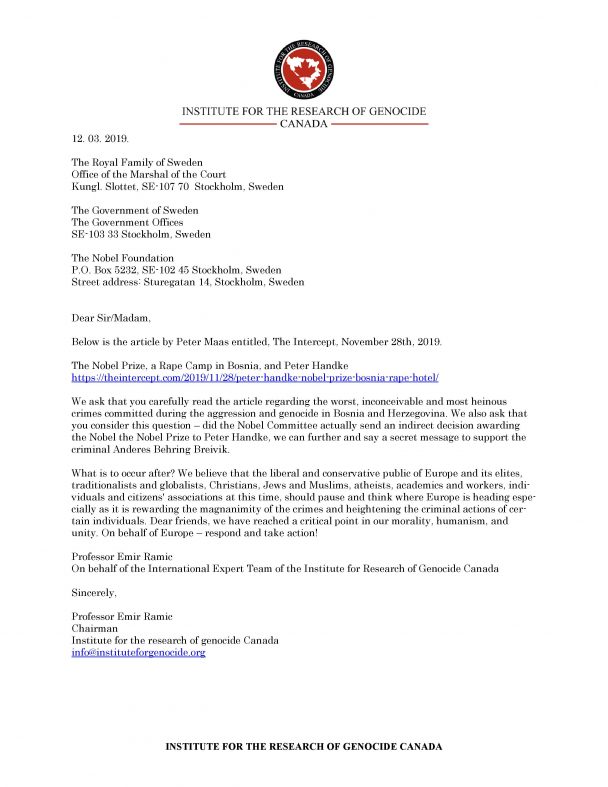 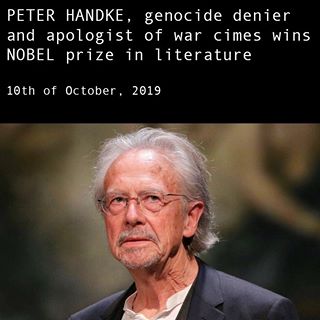 The Royal Family of Sweden
Office of the Marshal of the Court
Kungl. Slottet, SE-107 70  Stockholm, Sweden

Below is the article by Peter Maas entitled, The Intercept, November 28th, 2019.

The Nobel Prize, a Rape Camp in Bosnia, and Peter Handke
https://theintercept.com/2019/11/28/peter-handke-nobel-prize-bosnia-rape-hotel/

We ask that you carefully read the article regarding the worst, inconceivable and most heinous crimes committed during the aggression and genocide in Bosnia and Herzegovina. We also ask that you consider this question – did the Nobel Committee actually send an indirect decision awarding the Nobel the Nobel Prize to Peter Handke, we can further and say a secret message to support the criminal Anderes Behring Breivik.

What is to occur after? We believe that the liberal and conservative public of Europe and its elites, traditionalists and globalists, Christians, Jews and Muslims, atheists, academics and workers, individuals and citizens’ associations at this time, should pause and think where Europe is heading especially as it is rewarding the magnanimity of the crimes and heightening the criminal actions of certain individuals.
Dear friends, we have reached a critical point in our morality, humanism, and unity.
On behalf of Europe – respond and take action!