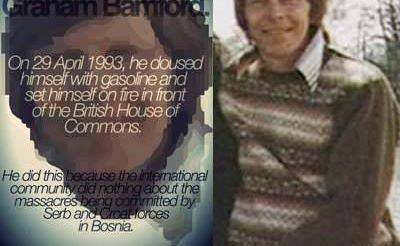 Graham Bamford from Great Britain burnt himself in London, as a sign of protests. He opted for this action in order to draw the attention of the British and world public to the war in BiH.

This nobleman from Britan spilled gasoline all over himself and burnt himself alive in the middle of the day, in front of the Lower House of the British Parliament. Dying in the most horrific agony was his way to point to the suffering of the citizens of BiH, who were frantically killed, persecuted and humiliated.

That he did as a sign of his personal protest on behalf of the inability of Great Britain to do something to help the citizens of Bosnia and Herzegovina during the aggression. Great Britain was shocked, his death was quickly obliterated.

This act of self-sacrifice should be remembered and appreciated, because such events are rarely noted in history.

Bamford’s last words were: “The British people must stop the war in Bosnia, using force if necessary. The British army must not only be a guardian of honor at mass funerals. Bosnian babies, children and women are patiently waiting for the politicians to do what they should do – provide military protection. They must not stand aside and observe”.

Bamford had no connections with BiH and its citizens whatsoever, but the images of terror from BiH made him sacrifice. Bamford was deeply shocked with images that came from Croatia and BiH. In the testimonies of his acquaintances and psychologists, he saw his own daughter in every child-victim of the war in BiH. His condition deteriorated after the shootings of the massacre in Ahmići, on the 16th of April 1993, when 116 people were killed, including a three-month-old baby.

For the majority of citizens in BiH, Graham Bamford is a typical British name and last name, without any special significance. Although he sacrificed himself to draw the world’s attention to the war in BiH, his name is mentioned only on April 6, during the presentation of the award named after him. The award was established by the City Administration of the City of Sarajevo in 2009.

Croatian film director Nenad Puhovski made a documentary about his action and the silence that followed it.