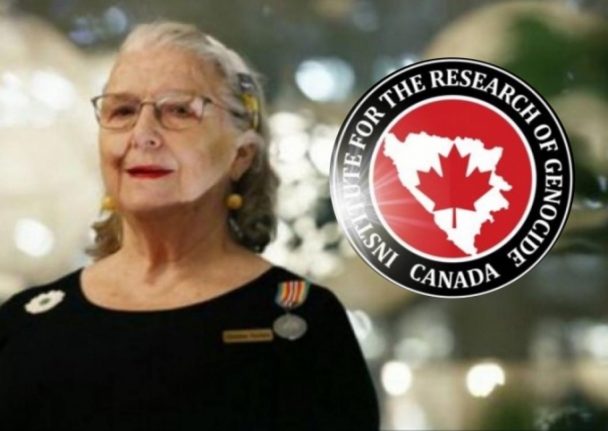 The brave and moral authority of Sweden and the whole world, the former Nobel laureate Christina Doctare, the one who returned the Nobel Peace Prize due to the same prize being awarded to the the genocide denier in Srebrenica and BiH, Peter Handke, just became a member of the IGK International Expert Team.

IGK is honored by the membership of Ms. Christina Doctare in the International Expert Team, a noble person who returned her once noble and prestigious Nobel Prize as the same was awarded to the genocide denier of Srebrenica and BiH genocide Mr. Handke. IGK has received the exclusive right from Ms.Christine Doctare to publish her book “When you expect a man to be a man”, which has been translated into a Bosnian language and is available to public on our web site www.instituteforgenocide.org

We are reminded of the great words of the great Christine. “Yes, I received the Nobel Prize in 1998, as a member of the United Nations peacekeeping force. But I am returning it tonight. I was a witness to what happened during the war in the Balkans. I was there and I could not think that I would stand here 27 years later. and to testify that this just happened. Handke is someone who denies everything I have experienced and I am very upset because this is genocide! ” With these words, the Swede of the largest heart Christina Doctare addressed those present at the protest in Stockholm, symbolically returning her “Nobel” at the moment when the Swedish king handed it to the genocide denier Peter Handke.

We would like to remind you of the IGK letter written to the Swedish Academy on the occasion of the shameful awarding of the Nobel Prize to Mr. Handke. The IGK wrote: “We are appalled that you decided to present this year’s Nobel Prize for Literature to Peter Handke, a man who denies genocide in Srebrenica, who denies the siege of Sarajevo, the shelling of Dubrovnik, and who was a great friend of indicted war criminal Slobodan. Milosevic “. The Nobel Committee, by its decision to award the Nobel Prize to Peter Handke, actually sent an indirect, we can say secret message of support to the war criminals. We believe that the liberal and conservative public of Europe and its elites, traditionalists and globalists, Christians, Jews and Muslims, atheists, academics and workers, individuals and citizens’ associations at this time, in this place and on the occasion of this decision should stop and think – in which directions does the Europe goes with awards that support the glorification of crimes and criminals. “

Expressing gratitude to Christina Doctare, Emir Ramić, director of the IGK, wrote: In 1992, you became the first person to report a systematic sexual violence and rape of the women and girls in Bosnia and Herzegovinia. As an expert hired by the Hague Tribunal, you have made a huge contribution to the truth about the genocide in B&H and justice for the victims of that crime. You are a symbol of morality, humanism and unity. Thank you for reacting in the name of a better future to the shameful award of the Nobel Prize to the genocide denier in B&H. Thank you for your membership in the IGK thus giving a huge incentive to our members for even better work in the name of a better future for our civilization, for a world without war and genocide in which peace and respect for the other and different will prevail, in which truth overcomes untruth, justice overcomes guilt, and the culture of remembrance will overcome the culture of oblivion.