International Observer from IGC in Srebrenica 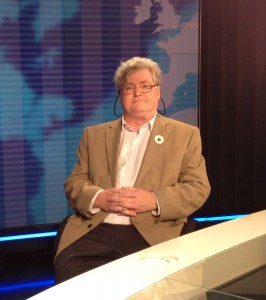 Member of the International Expert Team of the Institute for Research of Genocide, Canada will participate in the election observation in Srebrenica

David Pettigrew, PhD Professor of Philosophy, Southern Connecticut State University, New Haven and member of the International Expert Team of the Institute for Research of Genocide, Canada will be in Srebrenica for the election.  Mr. David Pettigrew has been officially credentialed as an International Observer in Srebrenica by the Election Commission of Bosnia and Herzegovina. As observer David Pettigrew will  provide an impartial and accurate assessment of the nature of election processes for the benefit of the population of Bosnia and Herzegovina, specially Srebrenica.

We would like to thank you David Pettigrew for participation in the election observation, which will contribute to administration of fair elections, transparency of the process and strengthening the confidence in the democratic development of the Bosnian and Herzegovinian society.

In Apil 1993, the United Nations declared the besieged enclave of Srebrenica, in north-eastern Bosnia, populated by 36,000 people (27,000 Bosniaks and 8,000 Serbs) a UN “safe area”. In July 1995, a 400-member contingent of Dutch peacekeepers from the UN Protection Force (UNPROFOR) failed to prevent the capture of Srebrenica by Bosnian Serb forces, assisted by irregular fighter units from Serbia, nor the subsequent mass atrocity.

In a unanimous ruling in 2004, the Appeals Chamber of the International Criminal Tribunal for the Former Yugoslavia (ICTY) in The Hague, ruled that the Srebrenica massacre constituted genocide.

Three years later, the International Court of Justice (ICJ) concurred with this judgment.

During the 2008 local elections, a legal exception was made for thousands of displaced Srebrenica citizens to vote in Srebrenica, despite their address at the time of the elections. The removal of this exception is the continuation of ethnic cleansing. A citizens’ group “I’ll Vote for Srebrenica” was formed, aimed at lobbying as many displaced Srebrenica citizens as possible to register their residency in the town and vote there. Bosniaks claim they are allowed to work in only one of a handful of local factories, while Serbs say they would be threatened if a Bosniak were mayor.

Thank you Professor David Pettigrew for your fight for the truth about the aggression on Republic of Bosnia and Herzegovina and genocide against its citizens, and to fight for justice for the victims of these crimes.