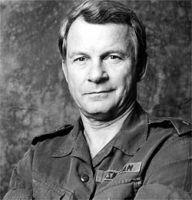 CALL TO ACTION: Help us stop the notorious Canadian general Lewis MacKenzie from speaking at tomorrow’s UN General Assembly debate on international justice and reconciliation. Write to the UN Secretary General to intervene and prevent this scandal from happening. If you agree with its text, please copy and e-mail this letter of protest to UN SG Ban ki Moon to the following e-mail addresses in his Executive Office and share with your friends: malcorra@un.org, haysom@un.org, kaneko@un.org Of course, if you prefer, use your own words. Also, if you so desire, you can also write to Vuk Jeremic’s office, to the person in charge of organizing the debate at: hunger@un.org SUBJECT LINE: Prevent the scandalous appearance of Lewis MacKenzie at the UN GA

Secretary General, I strongly protest the scandalous decision of the president of the UN General Assembly Vuk Jeremic to invite former Canadian general Lewis MacKenzie to take part in the expert panel on UN GA on international justice and reconciliation scheduled for 10 April. Leaving aside the dubious motives for the debate itself, which Mr. Jeremic is using for political purposes unbefitting of the UN GA president, it is simply unacceptable to have a person of Mac Kenzies profile be present, let alone offer opinions on this important subject. His role as the commander of the UN peacekeeping mission in Bosnia and Herzegovina is marred by serious allegations of misconduct that include alleged visits to a rape camp run by Bosnian Serbs in 1992. In December 1992, general Lewis MacKenzie has been accused by the Bosnian military prosecutor Mustafa Bisic of frequenting a rape camp “Kod Sonje” near Sarajevo. Although he was never prosecuted due to the immunity he enjoyed, the witness statements placing him at the rape camp have been detailed in the Final Report of the United Nations Commission of Experts Established Pursuant to the Security Council Resolution 780 (paragraphs 211, 216, 217). It is scandalous, disgusting and utterly unacceptable to have a person under such allegations appear at the UN to speak on justice and reconciliation, of all subjects. Secretary General, I write to you although I am completely aware that the debate has been organized by Vuk Jeremic and not you. However, deeply convinced that it is pointless to demand anything of Mr. Jeremic, who has already demonstrated scandalous disdain for the esteemed position he was entrusted with, I ask you to intervene and protect the dignity of the organization you represent. Mr. Ban ki Moon, I ask you to use the power of your office and request that Lewis MacKenzie is removed from the list of speakers at the tomorrow’s panel. I also ask you to boycott this politicized debate, which is making a mockery of the UN and the important issues it purports to be interested in exploring. The UN has a responsibility to uphold the dignity of all the people it serves, especially victims of mass atrocity. Having Lewis MacKenzie speak at this already very problematic event is a huge affront to victims everywhere. Sincerely, http://www.un.org/en/ga/president