Statement regarding attack in Kravice 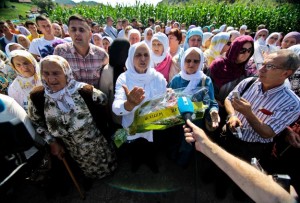 Statement regarding recent attack on Srebrenica mothers in Kravice

On behalf of the surviving victims of the aggression against the Republic of Bosnia and Herzegovina and genocide against its citizens, who presently reside in North America, we strongly condemn the incident that happened in Kravica just two days after the burial of 409 victims. The incident occured when members of the police of the entity Republika Srpska used force against representatives of the mothers of Srebrenica who wanted to pay tribute to their loved ones.

As is well known the agricultural properties in Kravica were one of the locations of the largest war crimes that occurred after the fall of Srebrenica in July 1995, when the army and police of the Bosnian Serbs executed more than a thousand men and boys. In the previous years, the mothers of Srebrenica and Zepa tried to enter the property in Kravice, but the local Serb police has managed to prevent them from paying their tribute to the victims. The police tried to stop them even this year, but the brave mothers of Srebrenica and Zepa could enter and lay flowers while enduring brutal violence against them.

The police who attacked the descendants of victims and witnesses of genocide in Kravica is now “interrogating” them and thus implementing the will of those who wish by all means to preserve the genocidal creation in Bosnia and Herzegovina. Physical assault and intimidation of the descendants who mourn their nearest is denial of genocide as well as humiliation of victims. Up to this day, mass graves were relocated and the bones of victims collected from various scattered graves. This behavior of the police and head of the RS entity constitutes genocide after genocide, which is not codified in the global legal practice, but is in Bosnia and Herzegovina.

We are inviting the political establishment of Bosniaks to finally work on the implementation of the ICJ verdict that genocide occurred in Srebrenica and to completely separate from the concept, “The creators and perpetrators of genocide”, which must be completely eliminated from social life. We ask that all graves of genocide are appointed sacred places and that the Parliamentary Assembly of Bosnia and Herzegovina adopts a law banning denial of the genocide and the Holocaust. Once again, we remind delegates that the denial of the Holocaust and genocide is a precondition for a new genocide. Only the recognition of genocide and sanctioning of all those who deny the genocide in Srebrenica can restore the idea of a multiethnic BiH. The state of Bosnia and Herzegovina can only the be built on a moral, political and cultural relationship about genocide that was committed against its citizens.