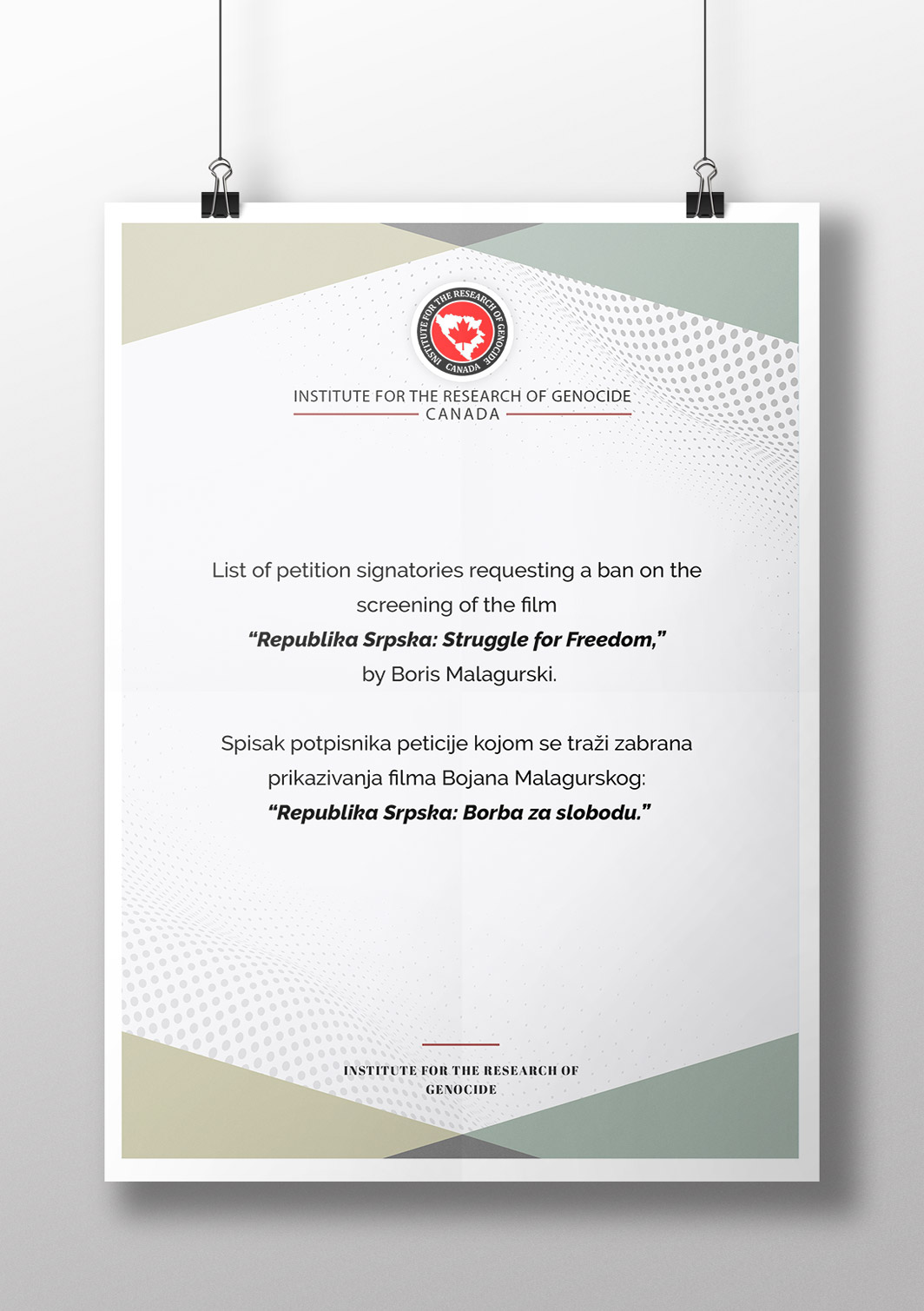 WORLD AND CITY LEADERS NOTIFIED ABOUT THE PETITION TO STOP THE SCREENING OF THE FILM “REPUBLIC OF SRPSKA: STRUGGLE FOR FREEDOM” BY A SERBIAN-CANADIAN DIRECTOR BORIS MALAGURSKI

Hamilton, Canada- 15 October 2022: The Institute for Research of Genocide Canada (IGC) has sent a petition asking for an immediate halt of the film promoting the Bosnian entity RS, including 27,000 signatories. The receivers of the said petition are mayors of all cities where the film’s screening was announced. Furthermore, a petition will receive prime ministers and presidents of the countries where the movie was to be screened. And important political, academic, and cultural subjects of Canada, the USA, and the European Union.

A cover letter was included with the petition. In the letter signed by Emir Ramić, director of IGC, he writes, among other things:

“We are sending you a petition with more than 27,000 signatories signatures from 67 countries worldwide. The signatories publicly express their deep concern about the film of the former Sputnik journalist and host of Russia Today, Serbian-Canadian director Boris Malagurski, “Republic of Srpska: Struggle for Freedom.”

Today, we must remember that incitement to genocide, hate speech, and glorifying genocide’s planners and perpetrators are crimes. Boris Malagurski’s film encourages a new genocide, which is a crime.

Bosnia and Herzegovina, Europe, and the world, full of surviving victims and witnesses of terrible crimes, deserve much better than this film. How can victims hope for truth and justice next to an author like Boris Malagurski? Author in whom humanity is defeated, who continues the criminal tradition of the Serbian Academy of Sciences, the Serbian Orthodox Church, and the Serbian Association of Writers. Revising historical, judicial, and scientific facts about the genocide to equalize the victim and crimes for the benefit of the idea of ​​Greater Serbia, which has not yet been defeated.

That is why every premiere of this film will remain recorded for posterity as one of the blackest days in the history of humankind.

We invite you to wake up from a disturbing world that destroys the human spirit and consciousness. Leaving people in constant fear, where non-humans rule and proclaim lies as truth and consider a crime a good thing. Become aware of our position, look for ways out, and be brave, unique, knowledgeable, and professional. The film humiliates the victims, but the victims will never be defeated because the truth and justice are on their side, not on quasi-artist Boris Malagurski.”

On the occasion of 124. birthday of Vijecnica – 124 years of the testimony of thousand year of the tradition of B&H State

The letter to Theodor Meron

A Call to Action and an Appeal