Join statement of IGC and CNAB 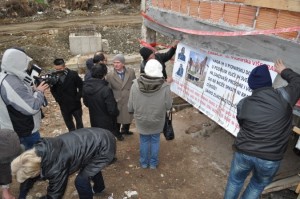 The Institute for Research of Genocide Canada and the Congress of North American Bosniaks has issued the following statement due to the recent construction permit granted to the local leaders in Visegrad in favor of reconstruction of objects in the area of Pionirska Street:

On behalf of all victims and witnesses of cruel aggression and genocide in Bosnia and Herzegovina during the 1990s, who temporarily live and work in North America, the Congress of North American Bosniaks expresses concern and condemns recent activities in the Serb Republic of Bosnia and Herzegovina. In recent days local political leaders in the Visegrad municipality, located in the Serb Republic, approved and obtained the construction permit to demolish a house in Pionirska Street, the house that serves as a memorial to all fallen innocent victims who were subjected to horrendous war crimes during the aggression and genocide on Bosnia and Herzegovina.