Dr. Jovic will never be able to silence Bosniak 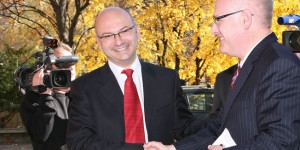 Dr. Dejan Jovic will never be able to silence Bosniak victims and survivors of the war – whether they be individuals living in Bosnia or in one of the diaspora communities

Open letter addressed to the President of the Republic of Croatia, Dr. Ivo Josipovic, regarding his Chief Analyst and Special Coordinator, Dr. Dejan Jovic, and this man’s denial of genocide in Bosnia-Herzegovina.

Suzana Vukic is a member of The Institute for Research of Genocide Canada (IGC) – of their managing board, as well as their International Expert Team Council and a Columnist of the Hudson/St.Lazare Gazette, Montreal, Canada

“In his articles targeting and slandering the IGC and other signatory organizations, Dr. Jovic states that as an academic, he has the right and the freedom to discuss any subject of his choosing, in whatever manner he desires. He uses this argument to justify portraying Slobodan Milosevic as a decent, respectful man, and the chetnik movement as a positive, unifying force for all parts of the former Yugoslavia (as opposed to the murderous, fascist, pro-Serb organization that we all know it to be). I would like to ask this question of Dr. Jovic: Would it be alright if I, under the guise of “academic”, were to write a paper or article attempting to rehabilitate the Ustasha movement, or Ante Pavelic, the leader of Croatia’s World War II Nazi Puppet regime? Would it be acceptable for me to attempt to minimize Jasenovac, the Ustasha-run World War II concentration camp? No, I am certain that this would not be acceptable. Likewise, Dr. Jovic cannot hope to utilize the veneer of scholarly legitimacy to justify his own genocide denial – or that of any other “academic”.

“In response to the concerns raised by the IGC and other signatories, Dr. Jovic has gone on a media rampage in which he has slandered all of the above organizations, and the individuals connected to them, in the most malicious manner possible. In his recently published article appearing in the online journal autograf.hr, Dr. Jovic refers to these organizations as “…marginal and completely irrelevant associations from the Bosniak diaspora….”. In the same article, Dr. Jovic goes one step further and calls them “…extremists who are not interested in preserving peace in this country, nor in the wider region, but instead desire some sort of a new war, in which they would be able to realize the goals that they were not able to accomplish in the previous war.” Dr. Jovic considers himself to be an anti-war humanitarian. Yet with his published words, he is clearly and irrefutably demonstrating his deep disdain for individuals who have suffered through some of the worst savageries of the Bosnian War and Genocide. Dr. Jovic is calling these people extremists, and implying that they bear responsibility for the harm that was done to them. He is accusing them of working to promote strife and warfare in and outside of Bosnia. And he also clearly blames them for the war that took place in Bosnia from 1992 to 1995. President Josipovic, I beg of you to carefully consider the words coming from your top advisor, so that you may understand how truly filthy and shameful it is to have a man like this sit in your office and exert his influence over you”!

More: Open letter addressed to the President of the Republic of Croatia, Dr. Ivo Josipovic, regarding his Chief Analyst and Special Coordinator, Dr. Dejan Jovic, and this man’s denial of genocide in Bosnia-Herzegovina.

← In Support of the Citizens of B&H
Mr. Zuroff called to visit B&H →