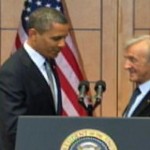 President Barack Obama spoke at the United States Holocaust Memorial Museum commemorating the Holocaust Remembrance Day. Prior to his address, he toured the museum with Elie Wiesel, Holocaust survivor and Nobel Laureate.

In his speech, President Obama stressed that we must tell our children about the Holocaust, where over six million men, women and children perished just because they were Jewish. “For the Holocaust may have reached its barbaric climax at Treblinka and Auschwitz and Belzec, but it started in the hearts of ordinary men and women. And we have seen it again – madness that can sweep through peoples, sweep through nations, embed itself. The killings in Cambodia, the killings in Rwanda, the killings in Bosnia, the killings in Darfur – they shock our conscience, but they are the awful extreme of a spectrum of ignorance and intolerance that we see every day; the bigotry that says another person is less than my equal, less than human. These are the seeds of hate that we cannot let take root in our heart” said Obama.

In response to mass atrocities, the United States has created the very first Atrocities Prevention Board, chaired by Ms. Samantha Power, Senior Director for Multilateral Affairs and Human Rights, National Security Council. The Board is to have its first meeting this afternoon, bringing senior officials across the government and NGO communities to discuss ways to increase the U.S. efforts in protecting innocent men, women and children from genocide across the world – an effort President Obama called “a core national security interest and a moral responsibility of the United States.”

“We’re doing more to protect women and girls from the horror of wartime sexual violence. With the arrest of fugitives like Ratko Mladic, charged with ethnic cleansing in Bosnia, the world sent a message to war criminals everywhere: We will not relent in bringing you to justice. Be on notice. And for the first time, we explicitly barred entry into the United States of those responsible for war crimes and crimes against humanity” stated Obama.

“Never again” is a challenge to all nations to reject hatred and defend the rights of innocent human beings so that they may live in peace. All nations must work harder to bring perpetrators to justice and to employ preventive measures so that innocent lives are spared. In 1993, during the opening of the Holocaust Museum in Washington D.C., Elie Wiesel asked President Clinton “Have we learned anything?” – referring to the international community’s refusal to intervene in Bosnia. Unfortunately, over 100,000 innocent men, women and children lost their lives and over 50,000 women were raped before the international community decided to take action in BiH.

“We are very encouraged by the formation of the Atrocities Prevention Board and commend the Administration in its efforts to prevent mass atrocities worldwide. We are pleased to see that Ms. Samantha Power – a long time advocate of genocide prevention in Bosnia and around the world will be chairing the Board. The atrocities such as the Holocaust, the ruthless killings in Bosnia, Rwanda, Cambodia and elsewhere in the world must never be forgotten and we must adamant in our quest for peace and in preventing current conflicts from escalating.” said ACBH President, Admir Serifovic.

25th anniversary of the crime: Crime in Ahmici entered the history as one of the most terrifying illustration of inhumanity

Letter to the European Parliament