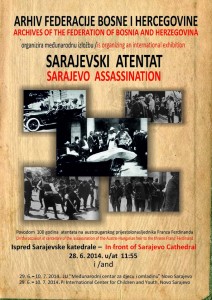 The Institute for Research of Genocide, Canada supports efforts of the Archive of the Federation of Bosnia and Herzegovina to mark 100 years since the assassination of the Austrian-Hungarian Archduke Franz Ferdinand and his wife Sophie. The exhibition has  international profile. Its journey around the world continues after setting in Sarajevo on June 28 in front of the cathedral.

Director of the Archive of the Federation of Bosnia and Herzegovina Adamir Jerkovic is a member of the International Expert Team of the Institute for Research of Genocide, Canada.

For the occasion of marking 100 year anniversary of assassination of Austro-Hungarian heir to the throne Franz Ferdinand, the Archives of the Federation of Bosnia and Herzegovina organizes on June 28, 2014 at 11:55 in front of Sarajevo Cathedral international exhibition “Sarajevo Assassination”. This exhibition follows the last trip of Franz Ferdinand, that started in Trieste, continued in Metković and Mostar and finally ended with his assassination in Sarajevo. The exhibitions were already set up in these towns, and after the exhibition in Sarajevo, it will move on to other cities around the world. International exhibition “ Sarajevo Assassination” presents events from hundred years ago without ideological markings and tells a story of its main characters in an objective manner. This is a historical presentation of a time that preceded World War I.