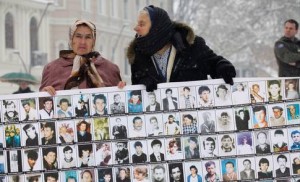 This is a guest post by Markus Göransson, Jonas Paulsson and Hasan Nuhanović. It was originally published in Swedish in Aftonbladet on 15 July 2014

Nineteen years have passed since the massacre in Srebrenica in July 1995. Sweden should shoulder part of the blame for the fact that the massacre of eight thousand men and boys during the Bosnian War could take place. During the war, the centre-right government under Prime Minister Carl Bildt provided unflinching support to an erratic and feckless European policy that rewarded Serbian aggression and limited the possibilities for the Bosnian government to defend its people. The Srebrenica massacre was the nadir of this policy, which ever since the beginning of the war had capitulated in the face of the Serbian assault on the fledgling Bosnian state.

Whilst other countries, not least the Netherlands and the United Kingdom, have scrutinised their roles in the Bosnian tragedy, a frank discussion about Sweden’s part has yet to take place in the Scandinavian kingdom. It is high time that such a discussion begins. The actions of the Bildt government are unworthy of a country that prides itself on its struggle for international peace and justice.

In international terms, the responsibility for the Srebrenica massacre is usually laid at the feet of the United Nations. The Dutch UN battalion, stationed near Srebrenica in July 1995, has been given most of the blame. Yet, the indisputable weakness and pliancy of those who took decisions within the UN machinery during those fateful days nineteen years ago must not overshadow the far greater responsibility that many European countries, among them Sweden, hold for the way the war in the Balkans evolved.

When the commander of the Bosnian Serb forces, Ratko Mladic, shortly after the fall of Srebrenica ordered that the Bosniak men be taken away and executed, he did so feeling secure in his belief that the international community would not intervene. After all, Europe had been a passive onlooker for three years as Bosnian Serb troops had attacked and expelled non-Serbs from large parts of Bosnia. In the early months of the war, large swathes of eastern and northern Bosnia were cleansed of Bosniaks, who were living obstacles to the Serb nationalist dream of a greater Serbia. Sarajevo was surrounded by Serb canons, which poured down death and destruction on the city.

Instead of coming to the aid of the assailed Bosnian state, European countries successfully pushed through an international arms embargo against the former Yugoslavia – an embargo that froze Serbia’s overwhelming military advantage and prevented the Bosnian government from importing heavy weaponry. The United Kingdom and France, cheered on by Sweden, also took steps to compel the Bosnian government to endorse peace plans that would have entailed the recognition of the rebels’ territorial gains.

When the United States argued that military aircraft should be used to take out certain positions of the Bosnian Serb – among other things in order to break the siege of Sarajevo – the proposal was vehemently opposed by European statesmen. Instead, the Europeans, operating through the United Nations, moved to establish so called “safe areas” under UN supervision, ostensibly to protect Bosnian government enclaves within Serb-held territory.

One of these areas was Srebrenica, which had been surrounded by Bosnian Serb forces early during the war. A “safe area” in name, it did not receive much in the way of protection. A “peacekeeping battalion” of 450 men were sent in to protect the fifty thousand children, women and men who had gathered in the city, many of them refugees from other parts of eastern Bosnia. When Bosnian Serb troops seized the town on 11 July 1995, Mladic did not need long to convince the Dutch commander to hand over the people who had looked to the UN troops for protection.

Throughout their time in power, the Carl Bildt government gave unwavering support to the vapid policies that were cobbled together in Europe’s capitals. Without fail, the government signed off on the proposals about the arms embargo, the peace plans, the safe areas and the opposition to aerial attacks on Serb positions. The fact that the European efforts repeatedly came up short in the face of the Serb aggression did not seem to trouble it. The European response was water to the mill of Ratko Mladic, who took note of the fact that Europe was willing to stand idly by while brutal and unjust violence was perpetrated on its own shores.