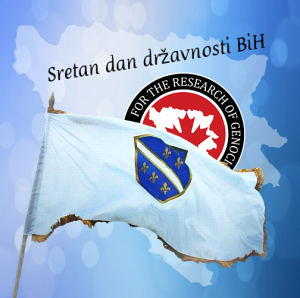 On the occasion of Statehood Day, The Institute for Research of Genocide, Canada gave best wishes to our country’s citizens on this historic date, emphasizing above all how much today means for Bosnia and Herzegovina.

We congratulate all peoples and citizens of BiH on Statehood Day, which reminds us of the renewal of a thousand years of historic state tradition of our homeland, and maintaining our identity, as well as a confirmation of state-legal sovereignty. Let this day be an opportunity for us to remember all those who gave their lives for an independent and sovereign state of BiH. The Statehood Day is an opportunity to remember the selfless struggle for BiH to be a whole, democratic country, oriented toward Europe and respect for human rights regardless of their nation or faith. Although 71 years have passed since the first session of the ZAVNOBiH in Mrkonjic-Grad, all BiH patriots still bear the same idea – BiH does not belong to one nation, but to all nations, national minorities, and citizens. Above all, it belongs to those who bear BiH in their hearts. 71 years ago the peoples of BiH bravely raised their voice against fascism and reestablished the statehood of their homeland. This is a fact that obliges us not to lose hope on the path to build a successful, functional BiH to the benefit of all peoples and citizens. In the current circumstances, for BiH the unity of pro-Bosnian and antifascist forces that accept and perceive it as their one true homeland – a state of equal peoples and citizens – is essential. We are confident that our message to those who covet and announce some cleavage or secession is unanimous and clear – BiH has survived all usurpation, the Nacertanije, memoranda and aggression, and will outlive all similar attempts by the heirs of the fascistic policies of Radovan Karadzic and Ratko Mladic, behind which in history stands just the indelible bloody trail of the most monstrous crimes committed in Europe since the Second World War, including genocide.

BiH is a historical entity which has its own identity and its own history. The name Bosnian is thus not a term for a national order, nor only a regional or territorial one. It is a name for the process of civilization, something which through all historical changes and political adversities has lasted for a millennium, to an equal degree practiced in everyday life with equal vitality by all. In this process of interaction national cultures participate as variables, retaining their special identities and exposing themselves to continuous culture creating relations of receiving and giving. In practice, every national culture in Bosnia is both what it is by name, and something more.

With pride we celebrate 25 November the Institute for Research of Genocide, Canada will advocate for the affirmation of antifascism as a civilizational tenet for the present world, maintaining the affirmation of state identity and sovereignty, and the legal security of BiH. The Institute for Research of Genocide, Canada especially emphasizes the importance of unity, equality, and multiculturalism of BiH society. We send our sincere congratulations to all BiH citizens with the desire and hope that we contribute to building coexistence and prosperity for our only BiH through joint advocacy, work, mutual understanding, and tolerance.

← Professor Boyle about Dayton
A true story from the Balkans →