“Under the UN protection” 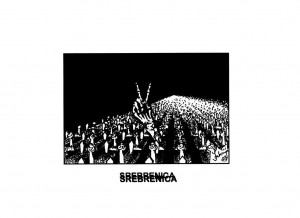 Authorʼs Note
“MAN IS A WOLF TO HIS FELLOW-MAN” the great philosopher Voltaire said, and I did not believe him until SREBRENICA happened.

Fortunately, I managed to flee at the right time. In doing so, I escaped the destiny of eight thousand, brutally killed, innocent residents of Srebrenica. I found myself in exile in a far away country, in the land of Vikings; far in the north, I was safe. But…inside me, an inferno. I am burning. My homeland is bleeding, and I was here, a runaway. The guilty conscience. I am thinking how to help. I am finding the solution. I start, for the first time in my life to draw caricatures. I want the world, that is (un)willingly distorting the perception of the war in BiH, to get to know the real truth, to
prevent the bloodshed and to help the victims. I drew my first illustration/caricature in the Refugee Center in Hemsdal, Norway in 1993 and then continued through the next decade, “freezing” the BiH war reflection reality with a string of caricatures that focused on Srebrenica’s tragedy, war criminals, justice, truth and the influence of the international community on BiH. The drawings were generated by and were timed to follow the extreme events in BiH and this book, actually, are a retrospective review of my works created in the period 1993-2006. Positive reviews received from both the BiH and Scandinavian public, who had a chance to see my caricatures at solo exhibitions (Sarajevo, Srebrenica, Oslo, Stockholm…) strongly motivated me to want to publish this book. Many believe that my caricatures represent an important contribution to keeping the memory of the Srebrenica (BiH) tragedy alive and that, indeed, was my goal. To us who survived, I want this book to be a constant reminder of the greatest Bosniaks’ tragedy in their history, and to our children, a road sign in creating a better tomorrow. Do not let us allow the ray of light on the dawn of Bosniaks’ or anybody else’s future to get dark. I would like to express my special appreciation to Mr. Dzevad Tasic, Editor-in-chief, “Bosnian Post”, the most popular newspaper amongst Bosnians in Scandinavia, for recognizing the significance of messages expressed through my caricatures, and for publishing them over all these years and in order in which they were created. I would also like to express my deep gratitude to editors of “Oslobodjenje”, especially to Mr. Borivoje Simic, who published my caricatures on the anniversaries of the Srebrenica Massacre. I also express my deep appreciation to much respected critics, translator and to those who helped me to publish this book. I am very grateful to the Kingdom of Norway for accepting my family and myself during the times of evil, and by doing so made it possible for me to continue with my work. I am thankful to the so-called International community for saving from starvation those compatriots of mine who, accidentally, escaped the slaughter and for stopping the war in my homeland; but, I will never forgive the International community for not doing anything to prevent the war, but, instead, it was passively watching the liquidation of over eight thousand innocent people from Srebrenica, amongst who were my brother, his son and the son of my sister. That is why the title of this book is “UNDER THE UN PROTECTION”, and I dedicate it to all the innocent victims of the Srebrenica Massacre.
Šukrija Meholjić

Srebrenica will always be a ʼblack markʼ on the European conscience. Srebrenica is a symbol of betrayal; a betrayal by the international community, particularly the UN and the ”big powers”. Srebrenica was a so-called ”protected zone”, yet, it was not protected; nor were her killers punished. Testimonials about Srebrenicaʼs tragic destiny do exist. Survivors gave their testimonies, journalists wrote articles, historians wrote studies and investigators in The Haag concluded their investigations. However, we still need to be reminded; it must not be forgotten, and it must nothappen again. That is why Sukrija Meholjicʼs drawings are so important. They are testimonies of the dark times. Political caricature can tell more than the written word. Caricatures are born at the same time events are taking place, like the daily news. When they are of a high quality, be it artistic or political, they have a permanent value; just like testimonies. Sukrija Meholjicʼs drawings have just such a quality. His caricatures are not only first-class drawings; they have a political message as well. Through them we can follow the tragic events of the ʼ90’s, seen through the eyes of an intellectual who has his opinions, who wants to tell us his point of view, who has a message for the world. His caricatures are proof that the artistʼs pen can be as effective as a weapon. Sukrija Meholjicʼs caricatures remind us of the existence of those shameful and tragic events, the cynical politicians, the incompetent diplomats. The book is dark and the content is a permanent record of the dark times. Just knowing that this book exists, however, shows there is a ray of light, a trace of hope, that it will never happen again!

THE REVOLT OF THE SUFFERING

← “The Unquiet Dead”
IGC on the International Day of the Holocaust →