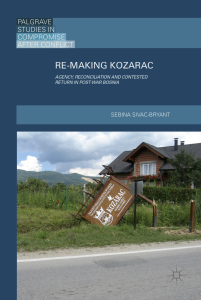 Sebina Sivac-Bryant is a member of the International Expert Team of the Institute for Research of Genocide, Canada

A book about not just suffering, but survival – and return, literally: to rebuild phoenix Kozarac, from the ashes. It starts with one of the little-told phenomena of recent military history, that of ‘The Army of the Dispossessed’, made up mostly of soldiers who had survived the camps and Serbian ‘cleansing’, fighting to go home, and documents the challenges that followed in re-making “the biggest little city in the world. Sebina knows this story from the inside – and her book is key to understanding Bosnia, Europe and the resilience of humankind.”

The author offers a compelling and provocative ethnography of Muslim return, which shows how victims of ethnic cleansing, usually described as ‘passive’ and ‘helpless’, take the initiative and reclaim their livelihoods.. The book holds up a mirror to well-intentioned transitional justice, reconciliation, and psycho-social interventions initiatives which often fail to address the real issues that returnees face. It also very interestingly explores the role of online community platforms in restoring the damaged social networks of displaced communities.”

Prof. Dr. Ger Duijzings, Professor of Social Anthropology at the University of Regensburg and Graduate School for East and Southeast European Studies

…written with a combination of passion and sober realism by one of the displaced people themselves. Sebina Sivac-Bryant has produced a truly remarkable piece of research.”

The legal nature of the war in B&H

Bosnia v. Serbia and the status of rape as genocide under international law