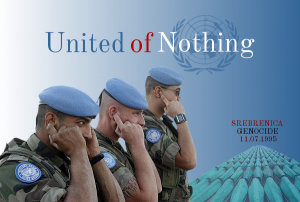 Betrayal of Bosnia by the United Nations and the World Community

Now the question arises: Why did the UN and rest of the World Community, instead of protecting Bosnia, played a part in its destruction? This is a phenomenon that cannot be easily understood – but there were some clear-cut reasons and those will be briefly discussed. Firstly, it was not literally the entire world that denied Bosnia’s right to self-defense but was the five nations who controlled the UN Security Council: Britain, France, United States, Germany and Russia. This really questions democracy and credibility of the United Nations. While most of the members of the General Assembly and even some members of the Security Council voted to lift the arms embargo on Bosnia the permanent members denied it. What gives them the right to override established International Laws of the United Nations? And why were they so stubborn in not lifting the arms embargo? The Bosnians constantly made it clear that they didn’t want foreign troops to help them – they only wanted the right to defend themselves. Sefer Halilovic, at the time the Commander of the Bosnian Army, repeatedly stated that Bosnia did not want the United States or any other power to deploy its ground forces in the Balkans.18 If the United States or Europe would not assist Bosnia in defending its integrity as an integral state or believed they were under no obligation to forcefully deter acts of genocide, then at the very least these Great Powers should cease to deliberately obstruct the ability of Bosnia to act in its own self-defense.19 The Bosnians simply pleaded: If you cannot or will not help us, then have the moral decency to cause us no harm. The reason why the United States and the select few hegemonic European Powers took actions to guarantee the destruction of Bosnia may lie in cynicism and systematic prejudice. If the victims of genocide had been Christians (in which most of the Europeans share in religion) instead of Muslims in Bosnia the reaction would have definitely been different. In the words of a French Diplomat, “Our interests are closer to the Serbs than you think”, “We worry more about the Muslims than about the Serbs”.20. With the failure of the World Community and the United Nations to protect Bosnia’s sovereignty and its people from genocide, ethnic cleansing and mass killings, questions arise about what role and for who’s real interest does the United Nations function for? Using Bosnia as a case in point, the United Nations even defied its own International Laws in guaranteeing the direct and indirect destruction of Bosnia and its people. With this evidence of the United Nation’s great failure in preventing genocide and a, virtual, systematic annihilation of its member State, must the UN be radically reformed or simply abolished?

More: Betrayal of Bosnia by the United Nations

Tribute and tears for Srebrenica

Letter of the Canadian Bosniak Comunity