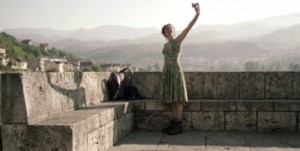 The Institute for Research of Genocide Canada at the world premiere of the film “For Those Who Can Tell No Tales”, director Jasmila Zbanic in Toronto
It’s a brave, true drama that pays tribute to the Bosniaks who were killed in the genocide in Visegrad, Bosnia and Herzegovina, especially women who have been tortured and raped in the camps for rape.

An Australian tourist discovers the silent legacy of genocide when she arrives in a seemingly idyllic little town Visegrad, Bosnia and Herzegovina.
It is a meditative tribute to the endangered memory of the Visegrad genocide, in which up to 3,000 people were murdered during the Bosnian Genocide, especially women who have been tortured and raped in the camps for rap
On a summer holiday through Bosnia- Herzegovina, Kym is the picture of an average tourist: visiting the sites and souvenir shops promoted in her guidebooks, keeping a video diary. Yet her stay at a hotel in Visegrad inexplicably gives way to anxiety and sleepless nights. Upon returning home to Australia, she finds out that the Vilina Vlas hotel was used as a rape camp during the war. Evocations of the region’s atrocities begin to haunt her, as does the question of why the guidebook, or the town itself, made no mention of the event. The spectre of trauma is finally so insistent that she is compelled to return to Visegrad and investigate this hidden history for herself.
Kym is portrayed here by performance artist Kym Vercoe, on whose own story the film is based. Valiantly revisiting her own experiences, Vercoe delivers a performance of unshakable veracity and immediacy, while Zbanic carefully structures the film like a puzzle, subtly piecing together the progression of Kym’s personal investment in the atrocities and revealing the willful amnesia that surrounds Visegrad. Zbanic’s camera glides over the town’s topography as though searching for the dormant memories that lie within. Part drama, part essay film.

For Those Who Can Tell No Tales is an important work of cinema as well as a history document, making us living witness to its troubling revelations.
Zbanic delivers a stirring meditation on how a forgotten history still haunts the present, but it’s packaged in a plot that feels too earnest.

The Trouble with Rape Trials