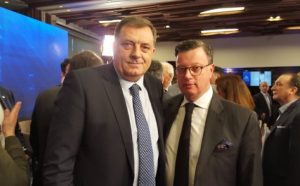 The members of the Bosniak Congress of North America and the Institute for Research of Genocide Canada would like to thank and congratulate Cristian Dan Preda on his thorough report and the positive role he played in passing of the February 15, 2017 EU resolution regarding Bosnia and Herzegovinas step-wise ascension towards EU membership. We would also like to thank the council for its commitment to Bosnia’s progress and entry into the EU. We are very grateful for the many encouraging members of the parliament who spoke fairly of Bosnia’s progress and efforts in resolving the ethno-political challenges that continue to undermine its development and EU readiness. Several of these challenges were discussed including ethnic fragmentation, slow economic growth, very high unemployment rate and risk of “brain drain” – tendency of Bosnia’s young educated professionals to emigrate in hopes of finding adequate employment.

These challenges are very real, as is the strength, hope and determination of the Bosnian people to overcome these obstacles in efforts of building a better and harmonious future for all people of Bosnia and Herzegovina. We welcome these constructive comments by the EU parliament members as they serve to encourage further progress which will benefit not only Bosnia and its people but also the sorrounding EU neighbors which will benefit from Bosnia’s improved stability.

With that being said, we were absolutely appalled with the offensive misrepresentation of Bosnia made by Edouard Ferrand. He was offensive not only in his remarks but with the way he condescendingly addressed Mr. Preda and his report. Edouard Ferrand’s baseless claim that Bosnia is filled with “radical Islamist engaged in jihad” is not only completely false but also exactly the type of nationalist rhetoric propagated by the leaders of the Serb entity. This type of nationalist propaganda is used by the entity government to further polarize Serbs and to chronically destabilize the central government of Bosnia. This in turn leads to stunting of Bosnia’s progression into the EU through a chronic political stalemate that prevents positive reforms, integration and economic growth. Contrary to what Edouard Ferrand claims, Bosnian people, especially the Bosniaks desire a unified and stable Bosnia with accelerated economic development, as well as harmony and equal protection of all citizens of Bosnia regardless of religion or ethnicity. As we are all aware, the Bosniak people suffered in great numbers at the hands of Serb fascists in a recent and painful war which resulted in genocide of Bosniaks, mass displacement and creation of “Republika Sprska” which to this day praises its genocidal war-time generals as heros.

Respected members of the EU parliament, we have seen what nationalism and fascist rhetoric led to in the 20th century and we can not allow this type of hateful speech to influence future EU parliament resolutions. We welcome any constructive criticism and ideas for betterment as it will help all people of Bosnia unify, overcome its challenges, and work towards a better future for all its citizens.

Dr. Emir Ramic
Chairman of the Institute for Research of Genocide Canada

To include camps Omarska and Trnopolje

A Letter of President of WBC to Judge Meron